We have had some requests to rate our dining and wining (food and wine) experience on New Years Eve.
Sounds great, lets do it we thought! Then as we actually thought about it there were some serious gaps in our recollection as well as some forgotten information that would be pertinent for those with enquiring minds. So as we struggled to reconstruct our evening we decided it may be better to just give an overview on this one (note to selves, take notes, steal special menu's and take pictures of all wine bottles). We started the evening at the house of our hosts and sipped on a couple bottles of Champagne (no idea what it was but it was good) before heading out to the restaurant.

So we apologise to Bistro Moulin if we forget to compliment you on something because we had hard drive failure of the head.
There was a group of 7 that much we are sure of. There was 3 regular bottles and one magnum of wine consumed at dinner, again consensus of memories. We had the early seating 6pm (for future reference book early if you want the later seating 8 or so we think) although due to some confusion that was tied to potential other New Years Eve restaurant choices we arrived for our 6:30pm seating (oops) but were treated as if we weren't wankers.

The menu was a fixed four course with 3 or 4 choices per course. Collectively the group were just as much food wankers as wine wankers, so to manage to please us all was quite impressive. Not only that the food was all very much enjoyed. At least as far as we can remember. The restaurant is small and cosy and has a nice friendly feel and the staff were attentive, pleasant and on the ball even if we were not. To quote someone who summed it up nicely "Lovely, warm, cozy French Bistro, with welcoming hosts."
As far as our wine, it was very good (it should be since we brought it with us). We started with a 2001 Justin Isocoles Magnum. Well balanced soft and yummy. The 2001 has reached its peak, we think, so drink what you have now. If you need help just call! 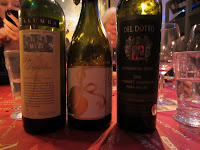 Next up was a young to the palate 2005 Tablas Creek Esprit de Beaucastel. Although it was quite good it definitely needs more time in the cellar as it seemed somewhat harsh in comparison. Given extra time and attention in the glass helped a lot. Being a thirsty bunch it was on to the next bottle, a lovely gem from Del Dotto, a 2008 Rutherford Estate Cabernet from Napa Valley. This wine was full with flavors of dark fruit and a lovely balanced finish. Thoroughly enjoyable wine! We then finished off with a wonderful surprise from down under from Yalumba in the Barossa Valley. Harold Obst - The Signature 2004. This wine was a Cabernet and Shiraz blend that was deep and intense but was very very drinkable. Lovely Cabernet fruit with some intensity provided by the Shiraz all blended together in a well balanced yet powerful wine (swirled not shaken). A great way to end our dinner.
As a note the staff changed our glassware each time they opened a new bottle. Not a common thing but it should be. Two thumbs up (or maybe should be seven). We would 'recommend' you stop by and enjoy the offerings of Bistro Moulin and tell em we sent you!

Back to the house to continue with some more good wine and some dessert. First up was a couple of bottles of 1998 Chateau de Beaucastel, Chateauneuf du Pape. Now given the amount of wine consumed to this point our judgement may be a bit sus, but this was exceptionally good wine, we're pretty sure, yea, no. Look we really did enjoy it and as we have had it before and thoroughly enjoyed it we are sure we are right! There was another Tablas Creek but do not remember what and a Spanish wine Torro or something. We will have to get back to you on those!

So there you have it! New Years in a nut shell, or an empty wine bottle!

Posted by Winewalkabout at 12:38 PM