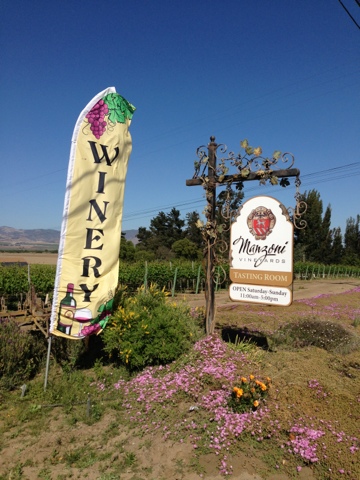 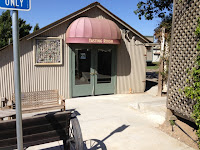 On a recent WineWalkabout Adventure to uncover some weeknight drinking wine, we came apon a lovely surprise. During this Adventure we came across this little gem of a Syrah from Manzoni Estate Vineyards. Located in the heart of Monterey Counties River Road Wine Trail this small family-owned and operated winery that produces small quantities of hand-crafted wines. The Syrah vines are grown in the 'Home Vineyard' which is planted to two Syrah clones: Estrella and Dijon 470. This is a great summer BBQ wine, or on second thoughts, for any time you would like it, and one that will be enjoyed by all who like a medium weight Syrah, with a red berry fruit, a bit of smoky meat and just the right amounts of acid and relatively rounded tannin's with a light pepper on the finish. The Syrah is a solid 6+ and ****, so buy a case as there were only 494 cases produced. So go on by Manzoni Estate Vineyards or to the Tasting room in Carmel and let em know we sent you, and tell em we say g'day! 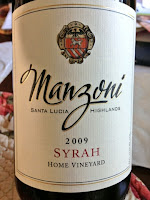 With two tasting rooms there is no excuse, or order from the link to the right.

Posted by Winewalkabout at 9:02 AM No comments:

Wine, a social enhancement, drink it! 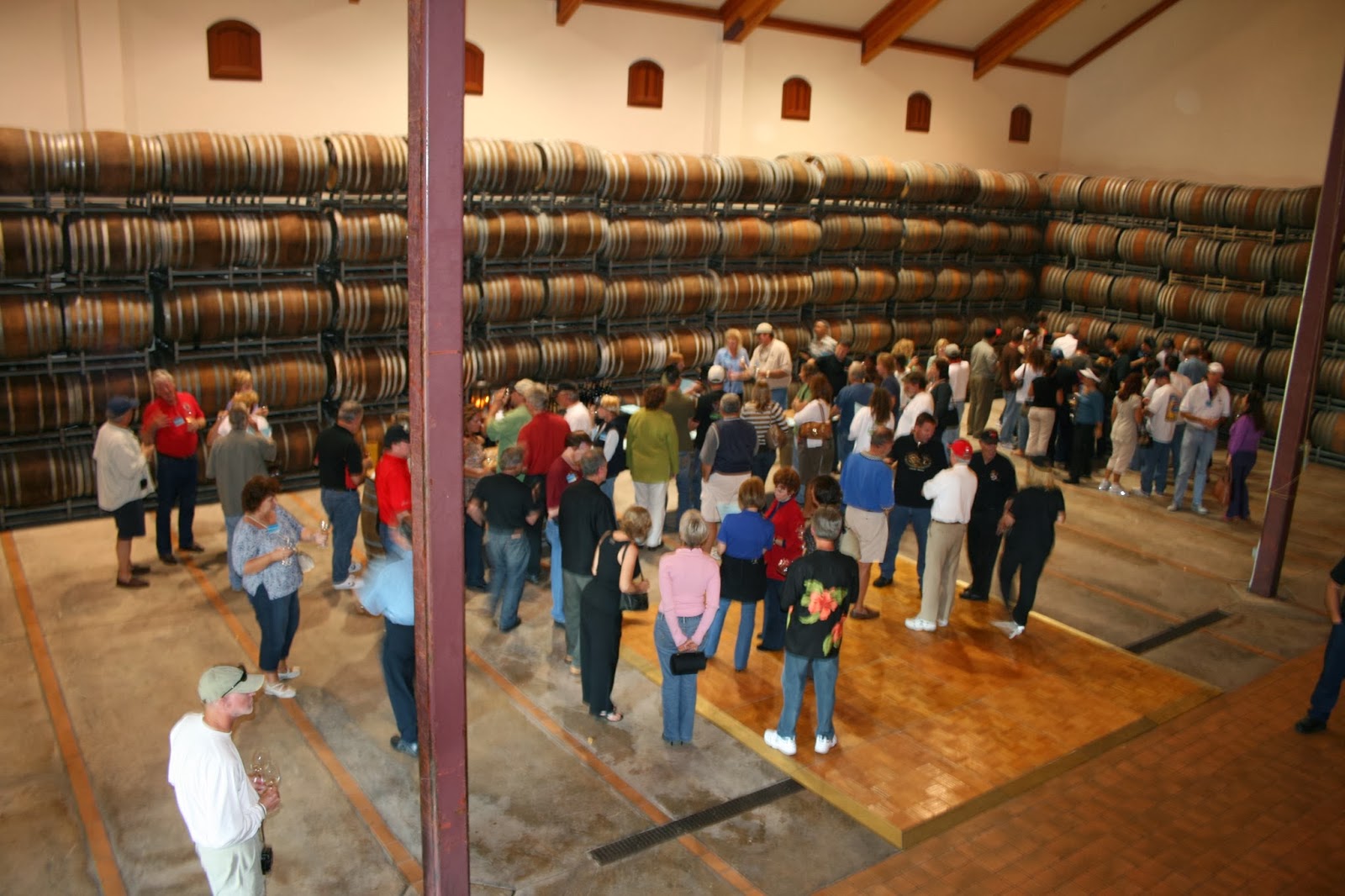 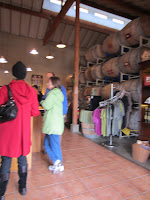 Wine is as unique and individual as the Terroir in which the vines grow and the grapes mature. It’s as diverse as the weather, as complex as those who make it, and as subtle as the vessels it’s matured in, and there's a special story inside each bottle. And then on top of all of that there's those with whom you drink the wine with and the circumstances you drink it in. 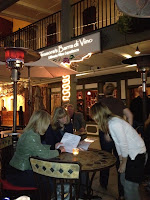 Wine adds a little something special to almost any social situation that we find ourselves in. We are after all, social animals, and there are not too many things better than hanging with friends or chosen family members, conversing and laughing and of course sharing some good wine, with or without food (food is our preference). Sometimes the wine itself provides the focus of the stories, whether it is the one you're sharing, or the ones you've tasted at some other time. Perhaps it’s about the one you hope to find. Maybe it was the story of that crazy adventure that brought you to that special wine that entertains. Wine does add that little extra pleasure to life! 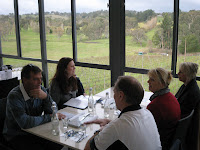 Sometimes your new favorite wine you purchased on the last tasting trip is not as good as you remember and sometimes that ‘ok’ wine seems to have morphed into a great one. Often this is just a case of the combination of the wine and food and the company or some combination thereof, again the social / situational nature of wine. Remember the best wine you ever had? It was probably also connected some special occasion event or person that will never be quite duplicated. 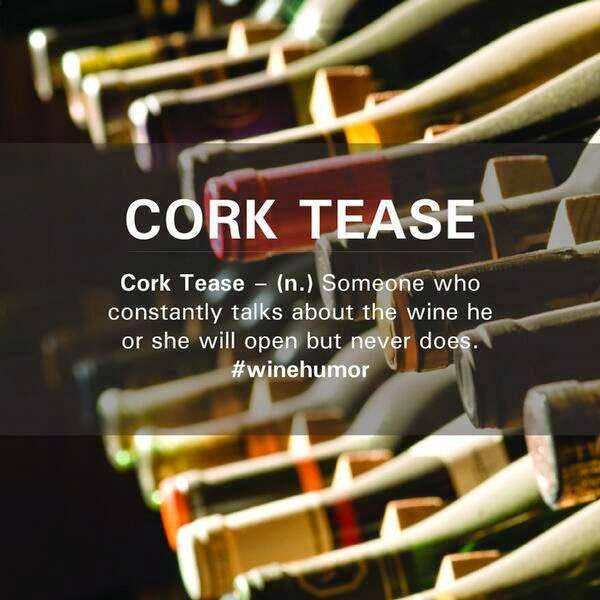 People often tell us of some incredible bottle they have in their wine storage that is just waiting for the perfect important event. The sad thing is that it's growing old and melancholy and probably not stored perfectly, as they worry about what special occasion could possibly be worthy enough to warrant it being opened. There is that thought that the current occasion is not up to the standard worthy of such a great wine or that a better one may come along. With that logic what often happens with thinking like that, the wine, well, just dies a slow lonely death of solitude and abandon. When you finally open it it is not showing well and a great wine has passed.

We say—next time good friends turn up with smiles on their faces—fetch that bottle, you know the one, you purchased it with hopes of a great time sharing with friends, pour large glasses and toast—here's to loving, laughing and to living long and prospering. Here's to being in the moment and to sharing that next great bottle!

Happy Tasting Adventures,
Cheers,
WineWalkabout
By the way, we are available to help consume and review good wine! 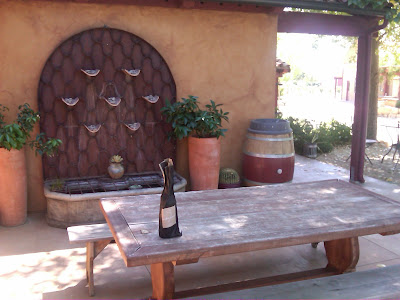 Posted by Winewalkabout at 8:57 PM 2 comments:

Email ThisBlogThis!Share to TwitterShare to FacebookShare to Pinterest
Labels: a social enhancement, drink it, Wine 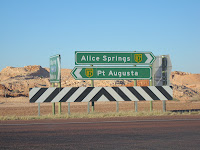 Coober Pedy. What a strange and interesting place. While traveling to the red center we needed a place to stop along the way and Coober Pedy seemed interesting enough to be the chosen spot.
About 850 kilometers north of Adelaide South Australia on the Stuart Highway the town is sometimes referred to as the "opal capital of the world" because of the quantity of precious opals that are mined there. As you approach the town the landscape becomes more like a moonscape with piles of white dirt and rock all over.
The name 'Coober Pedy' comes from the local Aboriginal term kupa-piti, which means 'white man's hole'. Fairly appropriate given the dwellings of those that started this place.
Probably just as famous for the way most people live as for the opals, 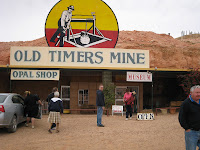 the harsh summer desert temperatures mean that many residents prefer to live in caves bored into the hillsides ("dugouts"). These dugouts remain at a constant temperature, while surface buildings need a lot of air-conditioning, especially during the summer months, when temperatures often exceed 45 degrees Celsius (113 degrees Fahrenheit).
The relative humidity rarely gets over 20% on these hot days, and the skies are usually cloud-free.
﻿﻿﻿﻿
There are some very interesting attractions and one of those is the Old Timers Mine. We took a tour of the old mine and found it to be informative and fascinating and we were glad we don’t have to live under the conditions that the early miners did. Not sure we could handle the current conditions either!

We received a great demonstration of the boring machine and the vacuum truck from our new bff Trev (he loves the Californian, OK any girls). The Old Timer's Mine is a window through time to the days of old and is an original opal mine dating back to 1916. 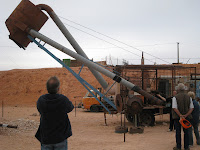 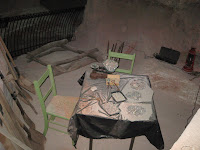 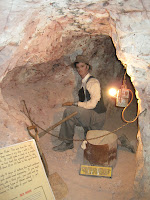 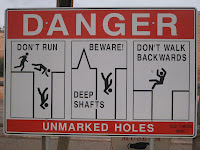 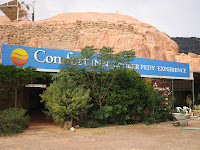 We stayed right next door at the Comfort Inn which proved to be fully underground and very comfortable as well as affordable. The rooms were completely underground and even with no air conditioning were cool and quiet. Walking around underground was not at all claustrophobic and the colors in the rock walls were quite beautiful. 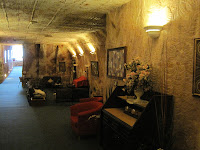 While not on a list of must do places, it is half way between Adelaide and Alice Springs or Uluru and as such makes for the perfect 24-48 hour stop over point. Let’s put it this way. If you’re traveling by, you must stop and check it out, as it is a unique and fascinating place.
If you are in the area this a MUST DO!

Tell em we sent you!

Driving up to Coober Pedy.

Posted by Winewalkabout at 9:33 PM 2 comments: 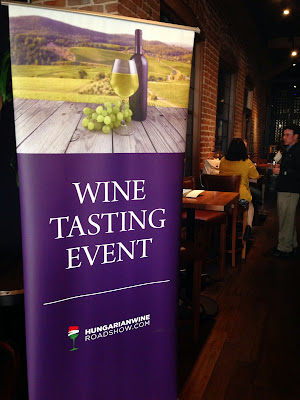 Not to long ago we had the pleasure of tasting a bunch of Hungarian wine at the Hungarian Wine Roadshow in San Francisco. As some of you know this can often lead to palate overload or thinking you like the wines more than you do because, well, the pretty girl is engaging, the expert tells a good story or the most likely culprit is after a dozen or so tastes in a friendly upbeat atmosphere you start to get a little buzzed (don't spit in front of the pretty girls, Mum says its not polite). The tasting was very nice and the representatives had voluminous amounts of information and there were some nice nibbles to for those who chose to indulge, and some truly indulged. Although we do really enjoy these tastings and as much value as they are in assessing new wines, it seems the real test is when you open a bottle at home on any given night to have with dinner. No pretense, no one to impress with your awe inspiring knowledge and tasting skills and the time to let the wine talk to you with the quiet to listen.

That being said we had arranged to get a few bottles chosen at random from the tasting list and plan to drink them at home with dinner and see how they fair. The first of these just happens to be going with our famous lamb chops (possibly an unfair expectation). 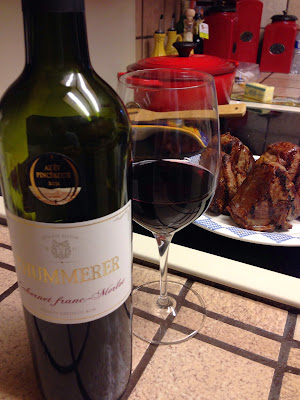 This is a dry light bodied wine with a soft mouth feel and light fine tannin structure. The initial sips were a little dry dusty with a hint of cherry and some raspberry flavors and the although the tannins were quite well integrated at first they had a little sharpness. This went away after a few minutes of playing with it in the glass and once the wine was also introduced to salami, smoked Gouda and water crackers it really fell into place. Drinking with the lamb it was perhaps just a little light to be a perfect match but none the less very enjoyable and it held its own quite well.

This wine rates a 6 is **** and a wine we would share with almost anyone and most importantly,
one we would purchase.


Kiwi & Koala
Posted by Winewalkabout at 7:51 AM 2 comments:

The 75+ most influential wine peeps on social media 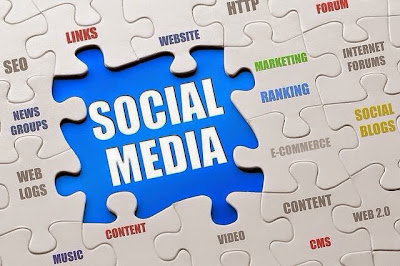 There are all sorts of ways to get ranked on some sort of top whatever lists, but we were quite surprised that after reading an article by the our social media mates the Wine Wankers we were actually on a couple of those lists of 'influencers in wine' using social media. We are in amongst some pretty good company and are are little humbled to be there. The Wine Wankers spent a fair amount of effort researching this and as far as we can tell they got it right (our numbers were correct). So congrats to them for their amazing success and we are raising a glass of something nice to celebrate our small success. Cheers to everyone on the list!
Here is an excerpt from their research. 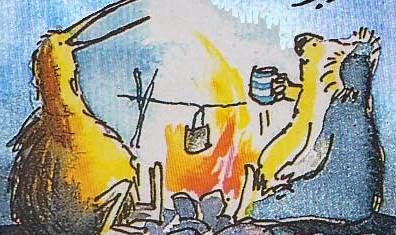 So, here are the 75+ most influential wine entities on the net as at July 14th 2014.
Author: Conrad (of the Wine Wankers)


Over the last couple of months there have been a few “most influencial wine people on the Internet” type lists circulated.  They've all been quite good indicators of wine related influence on the net, within the scope of what qualifies to make each list of course.  I’ll briefly go over two of these…
About Klout -Klout uses various networks to measure influence including Twitter, Facebook, LinkedIn, Wikipedia, Instagram, Bing, Google+, Tumblr, Foursquare, YouTube, Blogger, WordPress, Last.fm, Yammer and Flickr to derive a score out of 100.  Apparently a score of 63 puts you in the top 1-5% of all entities rated.  Read more about Klout here.
About Kred -Kred only measures social media influence derived from Twitter and Facebook.  It has 2 scores, one out of 1000 measuring social media influence and one out of 12 measuring outreach, ie how “social” an entity really is.  Apparently a score over 750 puts you in the top 1% and a score over 800 puts you in the top 0.1% of all entities on social media.  Read more about Kred here.

So, here are the 75+ most influential wine entities on the net as at mid July 20 (and also a link to the Wine Wankers).
We are a little surprised and excited at the same time to be on this list. We are in some pretty cool company. So congrats to those on the list and thanks to the guys at Wine Wankers for putting it together.
Happy Wine Adventures,
Cheers,
WineWalkabout.net
Kiwi & Koala