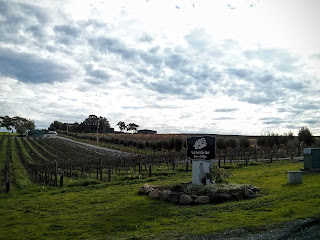 A molly what? A Mollydooker. What is a Mollydooker you ask? Well the simple Aussie answer is a lefty.
A mollydooker is an Australian expression for a left-handed person.

One’s dukes or dooks are one’s hands and is similar to the American term to duke it out, to fight with the fists. The other half of your term, molly, and the implication seems to have been that anybody left-handed was a bit off in at least one respect. There are various spellings for the slang term, including molly-duker, and there’s also a related form, molly-hander. It’s first recorded in Australia in the 1920s. Also a term used for left handed boxers, a Mollydooker.


So now that we have that established, why are we talkin about this Mollydooker? Well we just had a smashing visit to the world famous Mollydooker Winery and Cellar door in the amazing McLaren Vale region of South Australia.
Why would anyone call a winery Mollydooker? So we asked that question, as we are good like that. Turns out the owners of Mollydooker, Sparky and Sarah, are both lefties!

We arrived at the winery spot on 10am after a 45 min drive from the eastern suburbs of Adelaide. The new, or at least new to us, Southern Express-way making all the difference as the morning traffic was a bit more than expected.

McLaren Vale is a magical place and the Mollydooker winery and vineyards sit in a lovely part of it in a place called the Seaview Ridge. With its ancient soils and Mediterranean climate, it is home to some of the most iconic Australian wines. Here they have three separate vineyards – Long Gully Road, Coppermine Road and the Home Blocks, with a total of 116 acres of Shiraz, Cabernet and Merlot. As a bonus all of their grapes are grown sustainably.

Greeted by Jess (organizer extraordinaire) and Lee (Sparky's Dad) and after the obligatory Mollydooker handshakes we were fitted with the obligatory safety vest for touring the facilities (Aussie thing) and introduced to the 'Blue Eyed Boy' himself, Luke. With the team in place, Lee delivered the story of Mollydooker and the philosophy of  Sparky. Fascinating stuff and with some practices very different than most. The way the vines are pruned and in particular the way in which watering is managed is very interesting and something quite unique to Mollydooker.
We did not venture out into the vineyard as the wind and light showers made it a bit unpleasant outside. Instead Lee had visual aids and a great set of facts and stories to get us started.

After the intro Lee and Luke lead us off into the production facility for a good look around. One of the most important things we learned was that you should not let wine makers get a big head. One of the methods used to prevent this from happening at Mollydooker are the crushers are marked, small, medium and big. It used to read large but that was to many letters for those wine makers.
A well laid out facility with tanks full of good wine. How do we know the wine was good? We took some out and tasted it. A number of times to be sure! For those enquiring minds the latest release Velvet Glove is a bloody rippa! We were lucky to get a taste of this as it was the day before bottling. Talk about good timing!

The facility is also very clean, apparently someone is very particular about this... 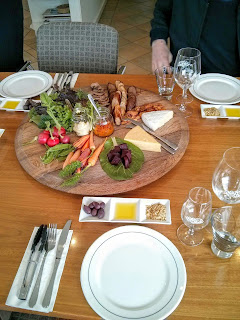 Lee also explained how barrel toasting started. An interesting theory and quite amusing although we won't repeat the story here, but you should ask when you go.

We wrapped up the tour with a long lunch where we enjoyed great food and wine and more great stories from Luke and Lee. All local produce and was it tasty! A wonderful feed with great wine. Lee's wife Janet even came by to say g'day and have a chat.

Look if you get a chance, book a tour and have a long lunch as well as the taste, and never look at tasting wine the same way again, we highly 'recommend' you do.

Cheers to Lee and Luke for being great and entertaining hosts. Hope your birthday was a beaut the next day Janet. 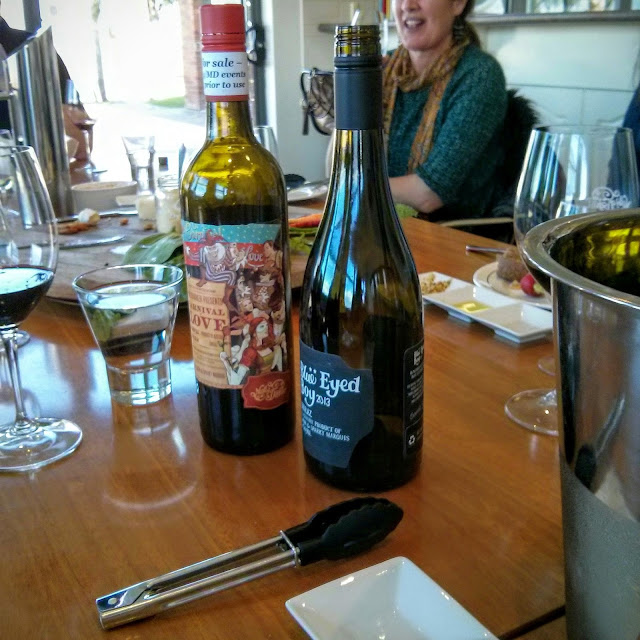 Posted by Winewalkabout at 2:43 PM