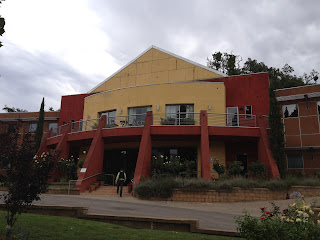 What can one say about a Justin Vineyards & Winery Wine Society Gala that has probably not already been said? For about $20 one got to wander all over the facility including the caves and Isosceles room and taste all of Justin’s wines (and drink Fiji water).  We were also able to snack on a variety of cheeses at the various pouring stations.
If that was not enough there were three different food stations serving up lunch from pulled pork sandwiches to turkey wraps and caprese sandwiches.
Plus there was a band to help you digest all of that.  I think Kiwi ate and drank through his $20 in the first five minutes.  KIWI!!!  There was also a sister winery (Justin wine club discounts apply) pouring their wine. Landmark Wines were pouring their 2010 Overlook Chardonnay, Grand Detour Pinot Noir and Kivelstadt Syrah. Given the nature of the event perhaps not the best place to be serving your wine. IT probably sounded like a good idea at corporate headquarters. 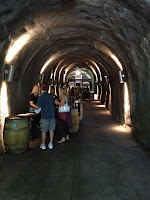 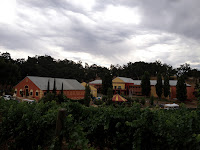 Getting a good taste of an ISOSCELES Reserve is not an easy thing to get. Kiwi is especially stingy with his collection.  At this event we were served the 2009 prior to it being shipped to the Wine Society members who opted to receive the Isosceles Reserve (this requires being on a waiting list for some time). Not just a taste but a good sized taste.  OK a small glass of any and all of Justin’s wines. As it turns out we did not realize exactly how big the tastes were until we discovered that the glass we were given to taste with would hold over a 750 ml bottle of wine! Don’t ask exactly how this was discovered!  KOALA!!!

The event was well attended and with only minor exceptions did not feel crowded. You could have made this an all day event starting at 11 and going till 4. Once your tasting was done you could buy glasses of any Justin wine for $5 (except Isosceles Reserve). Again a great deal! 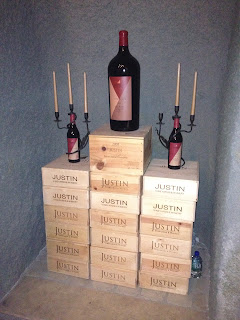 This is a fairdinkum value event and an opportunity to visit a great facility and taste some exclusive wines while being fed and entertained. Crikey it doesn’t get much better than that. All of the Justin wines were excellent in our view, especially the reds, and even though caving to the major corporate dollars of Fiji water, Justin still has managed to maintain its local operational feel.  Time will tell but for now a great place to go and enjoy good and excellent wine.

Cheers,
WineWalkabout
Kiwi & Koala
Posted by Winewalkabout at 10:18 AM