Size, does it matter? 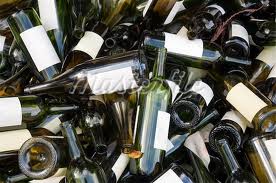 This is not a question for the ladies...
It's about what the difference is between ordering a split of Champagne and a magnum of Champagne. The magnum is actually eight times larger than the split. What, wait a minute your thinking, is that some kind of new math? Traditionally, wine is bottled in ten different sizes, and the names can get rather confusing. There are also a number of shapes, but that’s another story.
A standard bottle is 750 ml, or ¾ of a liter (25 and a bit fluid oz). A half-bottle, also known as a demi, is pretty straightforward, while a split is half of that, or ¼ of a standard bottle. The magnum is the equivalent of two standard bottles, while larger sizes are named typically after ancient kings and biblical characters, just to make sure there is no mathematical or logical relationship between size and name. There are also some differences between regions as to what bottle sizes are called just to confuse the issue. The same name may be used to refer to different size bottles in different regions of France. As one example, a Jeroboam in Burgundy and Champagne, is often called a Double Magnum in Bordeaux wine bottle sizes. A Jeroboam in Bordeaux Wine bottle size contains an extra two standard bottles of wine. Are you good and confused yet? But here is a very basic list of ten sizes (probably only need to remember 2-6) that we believe are the most common and what they are generally called on the street in the US or at least that’s what we have been told (right or wrong).

Posted by Winewalkabout at 1:35 PM