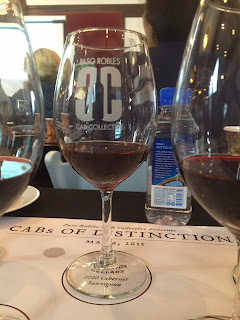 It's that time of year again when Cabernet becomes the focus in Paso Robles. The Paso Robles Cab Collective put on the CABs of Distinction Grand Tasting May 2nd with a plethora of award winning Bordeaux wine for your tasting pleasure. How do we know? We have been every year! Then there is the industry event in the middle of the next week. There are a lot of great wine events that we look forward to and new ones popping up all the time but few offer the top heavy premium wine that this event does.
As strange as it sounds, Cabernet in Paso Robles, was the entry wine for me in the late eighties while living in Paso Robles. There were just a few wineries back then but the ones I remember enjoying many times were Eberle, Adelaida, and Justin.

This year the media industry event was set up a little different and we also decided to change it up and have an overnight stay so we could really enjoy ourselves with out the hassle of driving. 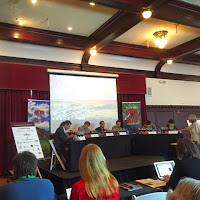 First up for us was a tasting session with The Quaff Report, by the SOMM Journal. This was a panel made up of Moderator Mike Madrigale, head sommelier at New Yorks Boulud, Jared Hooper wine director, Darius Allyn Maste Sommelier, Traci Dutton Sommelier, Paul Coker Sommelier, Terence Leavey Sommelier, and Naureen Ziam Wine director. This group of wine professionals were tasting six Cabernet or Cabernet blend wines. Two from France, two from Napa Valley and two from Paso Robles. Is it wrong to get a little joy from the sommeliers guessing wrong sometimes? Probably felt that way because we were watching them taste and had nothing to taste ourselves. Like a starving man watching someone eat in from of them. While interesting to listen to them engage in comparisons, we did feel a little disconnected. It would have been, at least for us, way better had we had the same wines to compare their commentary with our own sensory impressions. During the Q&A we were dying to ask 'you going to finish that?' But being the consummate professionals that we are there was no such disruption. The takeaway from this aside from learning we care a lot less when not engaged ourselves is that Somms can be wrong and Paso Cabs are as good as anything anywhere. 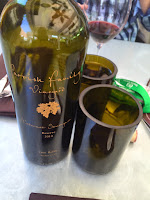 During the lunch break we wandered down to Thomas Hill Organics for some of the best burgers anywhere. Paired up with a bottle of Parish Family Vineyards Cabernet of course. Highly recommend that combination there.


The afternoon session was a lesson in phenolics that was both very interesting and a little overwhelming. 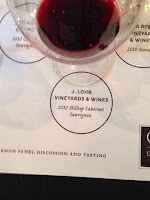 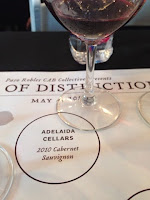 Paso Phenolics Phenomenon. The discussion revolved around understanding the ability to pinpoint moments in the maceration process that has an influence on making wine starting from set through bottling to help make better choices for making better wines. Most red wine analysis stop with the measurements of pH, Brix and TA measurements. But virtually all of the key compounds that make red wines red, or why some red wines are more astringent than others, are due mainly to the concentrations of phenolic compounds. As opposed to measuring specific compounds in red wines, Drs. Adams and Harbertson desire to measure the total amount of phenolic materials that precipitate with (salivary) proteins knowing that these proteins react with many different molecular weight Tannins and Polymeric Pigment. Together they created an assay that brought together the sensory perception of a wine’s astringency and color with its quantities of phenolic materials present in the wine. In short, how wine is perceived on the palate and how it tastes. Heady stuff! 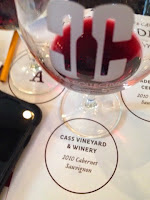 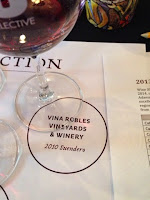 As the phenolic discussion was happening we were tasting four great exaples of Paso Robles Cabernet. One from Cass Vineyard and Winery their 2010 Cabernet Sauvignon, Adelaida Cellars 2010 Cabernet Sauvignon, J. Lohr Vineyards and wines 2010 Hilltop Cabernet Sauvignon and Vina Robles Vineyards and Winery 2010 Suendero and a fifth wine that was an example of a wine with too much astringency, Wine A. The take away here was that phenolics are a great tool to help with the process of making wine. It is something you are going to hear a lot more about. Wine A was as advertised a very unbalanced wine and the four from Paso Robles were, well lets just say all our glasses were empty.

Posted by Winewalkabout at 8:53 PM