The morning came fast and our plan to sleep in and have a leisurely breakfast was put to the test. Moving very slowly it took longer to be ready for our leisurely breakfast and so it was not quite as lengthy as originally planned. The breakfast at the Paso Robles Inn is legendary. A good hearty (if you want) meal of standard USA breakfast choices are to be had. Coffee and lots of it was a good start before the eggs and bacon arrived.

Today was going to be a good day, we could feel it. We were lucky enough, thanks to The Paso Robles CAB Collective to be heading to Santa Margarita Ranch to go on an Adventure! The Adventure was a tour of some of 14,000 acre ranch and then some zip lining, including zip lining over some vineyards. After the Zip line Adventure it was to be off to continue our tour of the property before a tasting of some unique wines. 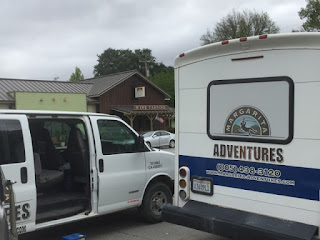 We arrived a few minutes early at the Margarita Adventures office in down town Santa Margarita and took a couple minutes to make some jack decisions as the weather was looking a bit dicey. With Jackets on it was in to the office to fill out some paperwork and sign our lives away. Then we were loaded into the van and with two other lucky folks and we were on our way.
We were told the story of when the ranch was first established and how it had arrived to the current time. 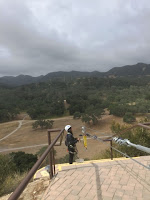 At one time it was owned by Patrick W. Murphy, who was the second owner of Santa Margarita Ranch beginning in 1861. He and his father Martin hailed from Sutter Creek, the epicenter of the California Gold Rush. As Sutter Creek farmers during the Gold Rush period, they made a fortune selling food and goods to the incoming miners. Patrick W. Murphy was later instrumental in bringing the Southern Pacific Railroad to Santa Margarita. 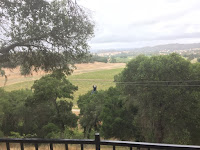 “Imagine you’re standing at the edge of a hill more than 150 feet high, sprawling vineyards ahead and oaks in every direction, red-tailed hawks soaring at eye level, and you’re about to step off the edge and fly out into the air. You soar like a bird and it’s a breathtaking sensation and not just because of the thrill of the ride. The landscape these zip lines navigate is spectacular and the final one has you soaring along an 1,800-foot zip line. 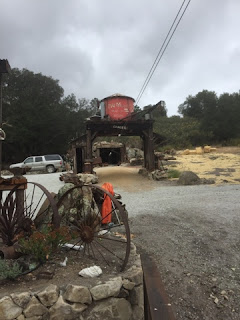 This fifth and final zip line called the Pinot Express, will send you out through the oak trees and over the Pinot Noir vineyards and at the end you will zip under an antique-style water tower with the optical illusion that you are about to careen into the mouth of an old mining shaft. The P.W. Murphy Mining Company themed water tank and mine is a reimagining of those historic times, pairing California’s Gold Rush period with Murphy’s personal experiences in Sutter Creek and Santa Margarita.

Once done with the thrill of the zip line we loaded back into the van to tour some more of the ranch. We learned that Robert Mondovi planted the first grapes here and were it not for some extenuating circumstance would probably be harvesting them today. We saw a number of Red Tailed Hawkes, a couple majestic Bald Eagles as well as deer, cattle and the usual assortment of birdlife.
We went into the old barns and saw the old train tracks. 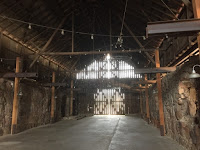 When we arrived back in town it was across the street to Ancient Peaks Tasting room to taste a special selection of four Cabernet Sauvignons that are all estate, made identically but grown in different soil types. 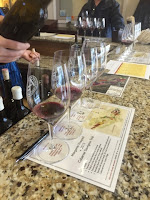 The Ancient Peaks Cabernet Sauvignon Trial was a very interesting. The vineyards were farmed the same way. They were picked the same day at similar ripeness and fermented with the exact same methods. Barreled down the same day to Taransaud medium-plus toast barrels with toasted heads, all used once previously on a Cabernet lot for Oyster Ridge. These four wines were noticeably different and on one pair it was primarily elevation within the same block. This was a great way to experience how Ancient sea bed type soil vs a Diablo Clay or a Monterey Shale. Given that these wines were a test to show soil off they were very nice drinking and we think that Ancient Peaks should do this again on a larger scale and sell the wine this way. We recon not only will John Q Public enjoy the wine but will be intrigued by the subtle but noticeable differences and would embrace a four pack to share with friends. What a great wine themed party that would make with four nice Cabernets that have a story and some science. Terrior is real and you can taste it! 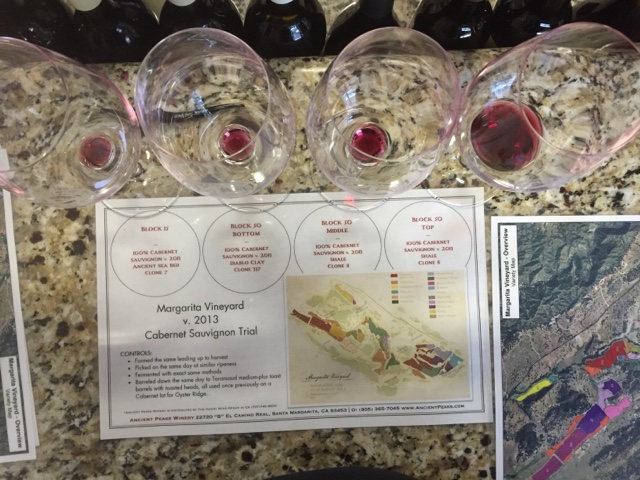 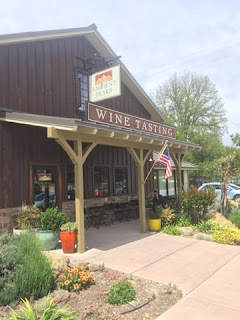 Thanks to Kristen from Ancient peaks and Kyndal from the Cab Collective for being lovely hosts and making the experience so nice. We tasted a number of their other wines and really enjoyed them all.
To sum up the experience, Paso Robles is a great presence in Cabernet and second to none and to the lovely ladies that helped organize us a heart felt thank you.

WineWalkabout
Posted by Winewalkabout at 5:33 PM