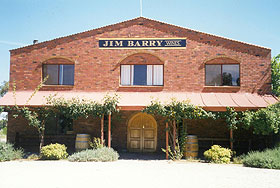 Jim Barry Wines is a family winery based in the Clare Valley South Australia. Jim Barry was the first qualified winemaker in the Clare Valley, graduating as the 17th student to gain a Degree in Oenology at the famous Roseworthy Agricultural College in 1947. The company was founded in 1959 by Jim and Nancy Barry.
We have visited the winery and have had the pleasure of chatting with Peter Barry in San Francisco. We met Peter who has been the owner manager for some time, while enjoying wines from The First Family of Wines group from Australia. 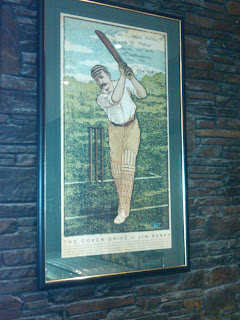 Back in 2009 Trev and his brother stopped in to the cellar door in the Clare Valley South Australia and had a great tasting of some impressive wines. They tasted such great wines at Jim Barry Wines cellar door. With some of Australia’s favourite wines like The Armagh, The McRae Wood, The Benbournie, First Eleven, Pb, The Cover Drive, The Lodge Hill Shiraz, The Barry Brothers, The Florita, The Lodge Hill Riesling and Watervale Riesling.  So good they could not resist purchasing a few gems to take with them.

The one that was the big prize of the group was the 2007 Armagh (got it heavily discounted due to damaged label).
The name of ‘Armagh’ was given to the area by the original Irish settlers who arrived in 1849, and named the lush rolling hills after their homeland.
Peter recalls hand watering the vines in the Armagh vineyard as a nine year old. “It was a very hot summer and the vines were struggling. We watered only the vines that looked dead from a 44 gallon drum on the back of Dad’s tractor.

Armagh is a prestigious wine of great distinction. A distinction which is well deserved. This wine delivers vintage after vintage. Surprisingly or at least to us, it does not seem to be as revered as we believe it should be to the general drinker. Maybe that is just our California impression. Recently while contemplating what wine was worthy enough to be served at a very special event the Armagh was uncovered. It was the perfect wine for the job. It even stopped the sommelier in his tracks...

For those that follow our wine reviews you will notice that this is a bit pricier that we usually write about. Yes you noticed correctly, not our usual every day tipple. This wine so impressed that it seemed simply just wrong not to stand on a chair and shout about how wonderful this bottle of wine was.

Some back ground on this vintage from the Jim Barry website. 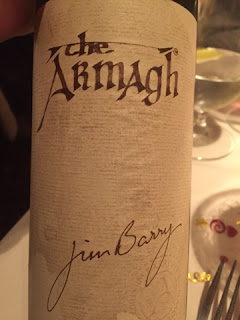 "The 2007 growing season was the driest in 24 years,
meaning that vintage was much earlier than usual.
The Armagh vineyard was hand-picked in early
March." 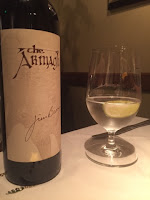 The 2007 Armagh is deep crimson in color and perhaps even tending to be a little purple and probably due to the low-yielding vines, it had a powerful nose of cranberry, mulberry, boysenberry and with the underlying characters of cinnamon, cedar, black pepper and spearmint.
On the palate the Armagh really shows its true strength and with its current age has a silky tannin structure as well as the flavors of red currants, black cherries and blueberries that seduce your palate with undercurrents of earth and truffles that are just about perfect. This wine has a great finish to complement the wonderful flavor and power in this beautiful wine, all the while still showing finesse and restraint. On the scale it gets no stars but a carackin score of  9. One of our highest ratings ever!

There is no more Armagh in our cellars. This leaves us with a heavy heart. There is a regret that more bottles were not purchased in 2009 at that discounted price to be enjoyed again. To be pulled out with some poncy friends to upstage their fancy French or Napa wines and to show them what a truly great wine tastes like. The fact that it comes from Clare Valley is just our poncy twist!

Posted by Winewalkabout at 5:02 PM