Paso Robles Cabs of Distinction 2016 The 'Judgement of Paso'.

Paso Robles has been a top wine destination for a number of years now. The region has grown into arguably one the best overall wine weekend / holiday destinations in America with world class wine, a good number of great restaurants and some fantastic places to stay. The world-class quality of its signature Cabernet Sauvignon and red Bordeaux varietals are why Wine Enthusiast Magazine named Paso Robles Wine Region of the Year in 2013.

This visit was the 4th annual Cabs of Distinction event that we have attended. It also happens to be the 4th annual event. #CABs2016 was the hashtag and we used it a bunch to share some of the numerous high lights of this great couple days in Paso Robles.

About The Paso Robles CAB Collective 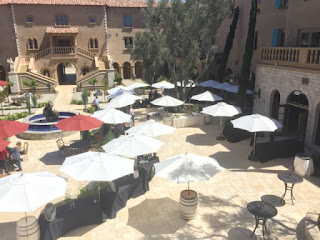 Formed in 2012, the Paso Robles CAB (Cabernet and Bordeaux) Collective (PRCC) strives to promote the full potential of the Paso Robles AVA in producing superior-quality, classic and age-worthy Cabernet and red Bordeaux varietals to consumers, trade and media worldwide.

Heading down to Paso on Wednesday morning there was one session on my mind. The Judgement of Paso. There were to be eight Bordeaux wines made up of French, Napa and Paso Robles wines and six sommeliers tasting and guessing just like the rest of us. This was a chance to compare the best of the best and compare my palate against some top somms. This was going to be awesome! But I'm getting ahead of myself. 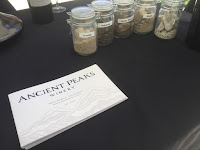 This year the event was to be held at the relatively new very swank and stylin Allegretto Vineyard Resort. Having been open less than a year they are still adding statues and other beautiful decorations throughout the facility. Check-in was a snap and I was soon into my beautiful suite with a lovely large balcony overlooking the beautiful 12,000sqft piazza where they were setting up for the walk around tasting. A quick unpack and down to the where the wine was and collected my mane badge and of course a glass.

The walk around was full of great Bordeaux wines and the good folks of the Paso Robles Cab Collective really showed the quality and value of Paso Robles wine. Tasting around the 22 wineries and trying to sample as many as possible I was constantly impressed. There were some you expect to be good or great and then there are those that I had never had or those I had not tasted in a long time that have stepped up their game. Of course stepping up of the game is one of the goals of the Paso CAB Collective. There were some absolutely crackin wines to be tasted but one in particular struck a chord with me. It was the 2012 Calcareous Vineyard Signature Cabernet Sauvignon. So impressed that when asked by Kyndal Kennedy of Parker Sanpei what my favorite wine from the tasting was the Calcareous is what I told her. Little did I know... 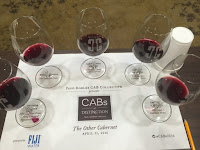 Next up was 'The Other Cabernet: In-depth exploration of the deliciously complex glories of Paso’s next big Bordeaux-style wine: Cabernet Franc'. The session was  moderated by the winemakers and some great insights were given as we tasted through the lovely wines. Cabernet Franc, a grape with softer tannins, floral notes and a much more feminine quality compared to the intense, bold and dramatic Cabernet Sauvignon. It’s commonly used as a blending grape and is often called the supporting actor.

That evening the group had a wonderful dinner at the fantastic new Adelaida Winery tasting room and facilities. It was a great way to end the day. The food was amazing and was prepared by prepared by Crush Catering and of course the wine was spot on. I had the pleasure of sharing a table with Daniel Daou and we discussed the impressive wines of Paso Robles and in particular the positive effect of the CAB Collective.

Thursday morning it was off to learn about Cab clones at 'Know Your Cab Clones'. 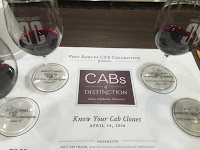 Winemakers and vineyard managers choose clones for many different reasons, from their resistance to certain local crop diseases, to their sugar concentrations, yields and flavor profiles. This along with farming techniques, site selection and the art of wine making date back hundreds of years. As a result, most of the wines you enjoy boast clone lineages that date back several centuries. The key clones in Paso include Clone 8, Clone 169, Clone 7 and Clone 337, among many others, and carry equally rich histories, and unique flavor characteristics.

The last event of #CABs2016 was held in the Allegretto’s lovely and perfectly sized Veneto Ballroom.
'Judgement Of Paso' 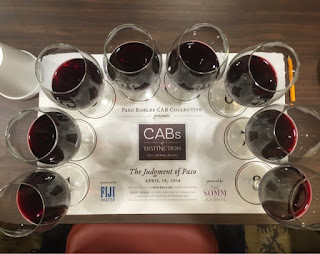 Here six somm's and wine experts put their skills to the test with eight wines and under the intense scrutiny of a room full of other somm's, industry professionals and wine experts and, well, me. Although it wasn’t really a judgment as there was no judging or rating by the team of sommeliers on the panel, it was more of a guessing session. I found it interesting how little familiarity most of the panel had with Paso Robles wine in general other than their last couple days of tasting. Perhaps something that the Somm Guild needs to correct in their education process.

The six sommeliers blind tasted the eight wines with the rest of us. They discussed and debated and engaged the crowd as they spoke on the qualities and personalities of the wines all the while attempting to determine the origin of each. Surprisingly few correct guesses were made, as many pros declared several Paso wines to be from Napa and vice versa. Back to the need for more Paso exposure for upcoming somms. All of them stated how pleasantly surprised they were after tasting Paso. “Well, I literally got almost all of them wrong,” said Scott Young CS, CSW, director of operations of Blackhouse Hospitality Management who was the moderator of the tasting.  He commented “I’m officially one of the converted.” All the other panelists I talked with echoed his statement. I'm proud to say I was able to accurately identify or at least guess 6 of the 8 wines.

Thanks to  Kyndal Kennedy of Parker Sanpei  and the Paso Robles Cab Collective I had a fantastic couple days of great wine at an event that was well organized, in a beautiful resort, with weather specially ordered in to make for the perfect way to show all who attended that Paso Robles is a world-class cabernet sauvignon region easily comparable to Napa Valley and Bordeaux?
Happy Wine Adventures,
Cheers,