It's always an exciting time as you embark upon your trip. The joy of being in an airport 2 hours ahead of your flight and guessing on traffic to get to SFO so you don't get stressed. 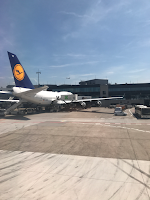 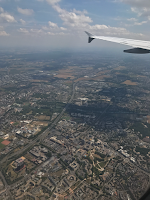 At the airport a solid 3 hours early and ready to go. This was going to be an epic Viking River Cruise and #euopeanvacation. Why does this hashtag have a certain familiarity? Anyhow, this was not our first trip to Europe but it was our first flights with Lufthansa. How would it be? Where would they stack up against other airlines we have flown with? Well let us say it felt a bit underwhelming. We left 30 min late. Not finished loading the catering. Not very German but may have nothing to do with them. Efficient and effective flight crew without much else (may we say stereotypical German). 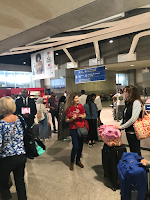 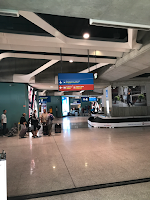 So was it good or bad? It was actually neither. Food? OK. Wine and beer, OK. Entertainment system was OK with limited options and pretty clunky.
Overall we give  a rating of  'Yeah it's OK'. We did end up arriving on time in Frankfurt. Just as well as we had to hike 24 gates to the end of the terminal go downstairs and hike back 24 gates (not very German). The second leg from Frankfurt to Paris was short and over in no time. Getting off and getting luggage easy enough and just as advertised, as we exited our Viking host was there to greet and take care of us.

From here our #europeanvacation now start.

WineWalkabout
Posted by Winewalkabout at 1:03 PM