In Carmel, a fortuitous discovery.

The Adventure begins with Koala wandering aimlessly in Carmel by the Sea with his daughter while waiting to have an early Christmas Dinner. All this wandering had worked up a thirst and they thought a drink may be in order. Tis the season you know.  For a taste! 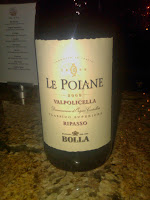 A few moments later what did they behold?  Pepe’s Vino Napoli.  How opportune! So in they went Koala and his daughter, greeted warmly by the young man behind the counter. A short discussion of the available options and the young man’s suggestion was taken. See picture to the left.  It was a Good Drop at a reasonable price ***. It was a bit tight at first but became very nice as it opened up in the glass. 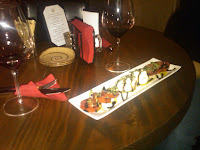 Next up was the need for a snack, of which they have an interesting selection. Koala settled for the Caprese Salad. Made to order right as we waited all of 3 minutes. Holy cow was it good!  One of the best Caprice Salads they have ever had! Perfectly ripe tomatoes, wonderful Mozzarella and lovely olive oil with the most amazing Balsamic Vinegar (made in the restaurant next door).  Just occurred to Koala that a food rating scale may be in order! UPDATE 'recommend' 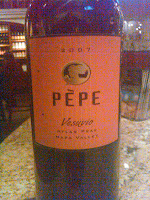 
Unfortunately time was not on their side, and the tasting had to come to an end sooner than was desired.


While not on the radar for an official WineWalkabout Adventure, nor was Kiwi in attendance for this fortuitous discovery, Koala never the less felt it was too nice a surprise to keep to himself. So if you are in Carmel by the Sea, check it out and let them know Koala sent you.
Pepe’s Vino Napoli on Dolores and Seventh. They won’t have a clue who you’re referring to but that’s ok.
Koala strikes ..............