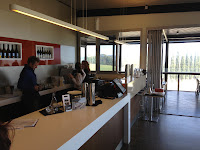 Koala recently attended an event at The National Wine Centre in called Friday Uncorked.As it turned out the Friday Uncorked event he attended featured the wines of The Lane Vineyards from the Adelaide Hill’s with none other than John Edwards himself doing the Master Class. The wines were fantastic and John was educational, entertaining and kept everyone’s attention. Telling the story of their first land purchase of twenty acres and how they have grown to over two hundred. He talked about the overall philosophy of The Lane and provided an interesting and relatively comprehensive overview. Koala thoroughly enjoyed the class that John put on and the conversations they had. If you ever get a chance to hear John speak don’t miss out. That being said Koala arranged to head on up to the Cellar Door to continue the chat and to have a look around. 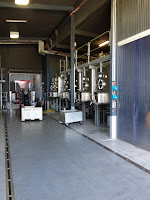 The beginnings of The Lane started as John Edwards searched for two years for land with the just right situation, orientation and soils he wanted for his vineyard. When he walked through the old farm gate on Ravenswood Lane he believed that this land would be the realization of that dream. This combination of knowing what he wanted, an exhaustive search and a bit of luck provided the perfect property for the grapes he was to plant.


The first wines were produced under the Ravenswood Lane label in 1996 and were to reward John’s vision and belief in the ‘terroir’ with some great wine. That early success then led to a seven-year joint venture with the Hardy Wine Company under the Adelaide Hills brand . John left the joint venture in 2005 to fully pursue his dream and the potential of his vineyard by producing single vineyard wines in a new, state-of-the art small batch winery at .

After a fantastic tasting conducted by Tully of most all of The Lane wines, Koala was given a tour around the facility. Tully left no corner out of the tour and Koala was very impressed by how efficiently this facility was laid out and by how clean it was. Every part of the facility flowed into the next and each part was very organized. This philosophy even carries over to the quality of their waste water including utilizing an ozone generator to sterilize barrels and tanks rather than using chemicals. This result’s in ‘cleaner’ waste water that is treated on-site in an aerobic system, polished and then returned to the vineyard as irrigation water. This process was selected because there is no interaction with groundwater or surface flows using this method.

While making great wine The Lane Vineyard also believes that wine labels should be authentic and reveal something specific about the identity of where that wine came from or as they say 'a genuine sense of place' or what the French call 'terroir'. What on the label The Lane Vineyard call, ‘the grain of truth’. On the labels of The Lane you won’t find your usual back label inscription, instead they use geographical coordinates called 'longitude and latitude' to pinpoint which vineyards the grapes came from. You can input the coordinates into Google maps and see the vineyards. This is just one example; 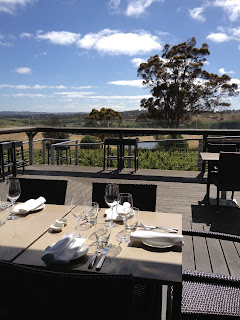 The restaurant at The Lane has one of the most beautiful views of the Adelaide hills and has received many accolades from numerous sources like, Gourmet Traveler Restaurant Guide 2013, SA Life and People’s Choice. There aren’t too many wineries that can boast a restaurant within the vineyard and fewer still which open for lunch seven days a week. The food is matched to the wine so you really can’t go wrong, and if you just want to graze there are plenty of plates to share while taking in those amazing views.

The Adelaide Hill’s Wine Region is producing some amazing wine and The Lane Winery is a leader in the region.


Koala rates The Lane in the Adelaide Hills of a “must do” for the wine, for the food and for the place!

Posted by Winewalkabout at 10:36 AM