When in Rome, Alpi Hotel

Rome is an amazing city. Period! There are ruins on top of ruins that are on top of ruins. For those who are up to walk (a lot) it is a never ending discovery of things to see. We had a recommendation to stay at Hotel Alpi. 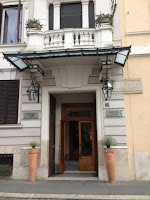 The Hotel Alpi is a family owned hotel that is in a quiet area of town two blocks from Termini Station. Most people would probably need the bus pass (relatively inexpensive) as its about a mile and a half to two miles from the Collosem / Forum area. It's a bit closer to the Trevi Fountain and Spanish steps but still a good twenty minutes. Of course, these areas are not on the same path but are two different legs of the triangle. Most of the sights need to be visited twice. Once at night and again during the day to really appreciate them. The city seems very safe day or night and other than wandering street vendors trying to sell you junk souvenirs and the like offers no cause for concern. Buses are everywhere but be aware that at commuting times they will be packed. Literally!

The Hotel Alpi is a cute boutique style Hotel which is part if its charm and also part of its quirkiness. Koalas shower was so small and oddly shaped if you dropped the soap it was never to be used during that shower again. The elevator was almost exactly the size of a British phone booth and up a flight of stairs to get to it, then often down a flight to get to your room. Now with Kiwi's room you also had to get on a second elevator after all that as well. 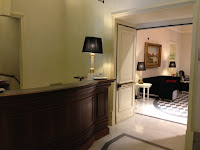 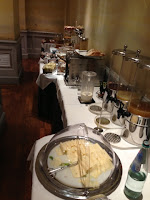 The quirks aside, the rooms were clean and comfortable and it was a pleasant stay. The staff were very helpful and just as importantly, the breakfast was substantial.


The location worked well for us, mostly because it really is at one end of everything which allowed for a continuous loop of sightseeing. If you stay in the middle you need to go both ways to see things. Termini station gives you a lot of options as well. We found that out as we experienced the Rome subway to the Vatican that it is something to behold.
We spent very little time other than sleeping at the Alpi but we give it a 'Good, would go back'.


Posted by Winewalkabout at 3:24 AM