The Vatican with Dark Rome Tours 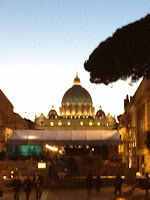 What's a trip to Rome without a visit to the Vatican?  Everyone we talked to told us that when in Rome you must go to the Vatican.  It doesn't matter if you are not Catholic, or even religious.  It's just a must do.

The next thing they tell you about is the crowds.  And there they were! We observed the crowds as we walked to our tour meeting point. The line was at least a kilometer long wrapped arround the imposing outer walls of the Vatican for about a kilometer. Crazy long!

Most of those in line would not make into the Vatican that day. Tens of thousands of people visit every day ( we heard 30,000!) and from what we saw we have no reason to doubt those amazing numbers. Oh, and for those unfortunate ones who visit in the summer on a hot day, may you rest in peace. The Vatican has no ventilation let alone air conditioning. That being said we still recommend a visit, just know that going in and adjust your tour times accordingly (early as possible in summer). 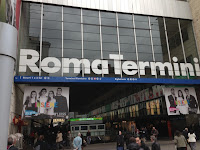 We were at the other end of the weather spectrum with cold wind and rain. Because of this we decided not to walk the hour to the Vatican and opted for the Subway from Termini Station which was just a couple blocks from our base at the Alpi Hotel. Termini is quite the experience. Bus tickets and train (high speed and regular) tickets are sold at electronic kiosks but not the subway. They are sold at the newsstands downstairs. Easy to find once you know, but a bit confusing at first. 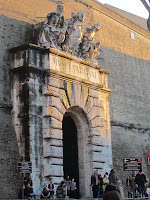 With a little help from a local we were all set, and with tickets in hand for just a few euros each we were on our way. Even when the power went out the Romans kept on moving and we just followed. They just bypassed the ticket gates and went down to the subway under emergency lights an packed into the subway train like sardines in a can.  Off we went trying to make sure we got off at the right stop. It was fairly easy actually. Once we arrived at the station we had about a five to ten minute walk to the Vatican Tour meeting point.


Did we mention that you really need to take a tour as the amount of stuff to take in at times is overwhelming even with a well educated tourguide. We chose Dark Rome and our guide Tiffany was brilliant.
The area surrounding the Vatican is one of the least attractive that we saw in Rome and on the morning we were there it was quite stormy which did not help. Tiffany expertly guided us through the skip the 2-3 hour line and into the Vatican (winter line). 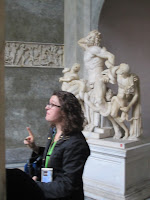 Now if you were paying attention as you read that last sentence you noticed the phrase “skip the line”. Yes, this is a common theme in Rome (and other tourist destinations we visited) and by choosing to pay for a tour you get to blow right past that line.
Some of the line on the day we went, may have been attributed to the fact that one Pope quit and the new guy was getting sworn in and our tour was right between the two events. The tour Tiffany took us on helped put the historical significance of the things we saw into some historical perspective. She was very passionate and knowledgeable of all things Vatican. She had left the USA on a one way ticket to Rome with the sole objective to be a Vatican tour guide. Mission accomplished to the benefit of everyone who is lucky enough to get her as a tour guide.
The DarkRome tour was worth every penny, and although we are sure there are other tour operators that are good we heard and observed some that were not. A good tour, with a great tour guide, of a place that is steeped in a long and colorful history. We give Dark Rome's Vatican Tour a 'Recommend'. If you get lucky enough to have Tiffany as your guide, thank…, well you know who to thank. 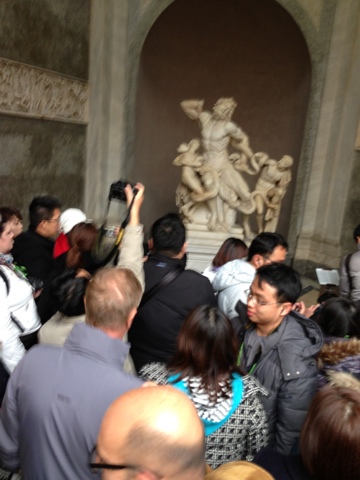 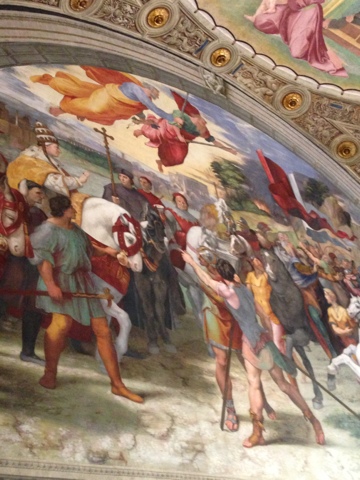 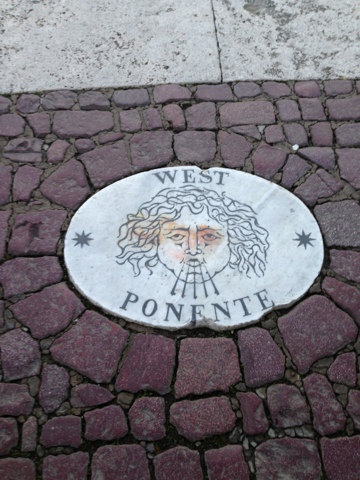 Posted by Winewalkabout at 2:16 PM