While reaching out to wineries in the Barossa Valley on a recent trip, one of the those we connected with was Elderton Wines. What a wonderful connection it turned out to be. Some places have good wine and some places have nice cellar doors. Some will have interesting vineyards and some will have history, even a place to stay perhaps. A few will even have some combination of these things. Very few have most of these things and fewer still have all of them. At Elderton they definitely fit into the later category. One of the wonderful things about the wine industry are the stories. The stories of the evolution of a businesses. Stories of a time when previous generations made tough choices, took big risks or had a vision that others of the time did not have. In every bottle is a potentially wonderful heartwarming story of passion, of hard work or heart break, sometimes dumb luck, sometimes good luck and yes Elderton Wines has all of these and even a couple stories that will tug heavily on your heart strings. 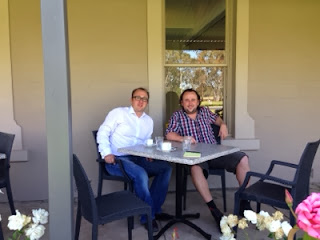 We had arranged to meet at the Cellar Door at 9am and get the day started from there. I walked to the Cellar Door from where I was staying at the Elderton Lodge about 300 meters down the road and found Co-managing Directors, Cameron and Allister Ashmead sitting on the front porch finishing their coffee's of which they immediately offered to get one for me. The Cellar Door manager Tush Steinert was on it, and a great coffee shop quality Cappuccino was soon served up. While enjoying the delicious Cappuccino we chatted and got to know each other a little bit.
You may wonder how with a last name of Ashmead they are running a family winery caller Elderton. Well let me try to tell a long story an shorten it up a bit. The estate vineyard was planted on the property in 1894 was named Elderton. It was successful for about 80 years but was let go derelict in the mid 70s (typical of the area in that time). The family Ashmead with Neal and Lorraine forging the way purchased the distressed property in 1979. It was 1982 before the first wine with the Elderton Label was released. The family business got a shot in the arm in 1993 when they won national acclaim after winning the Jimmy Watson Trophy. 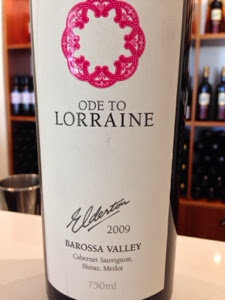 Tragedy struck in 1997 when Neil died tragically at age 50. Lorraine was placed in the role of chief executive and decisions had to be made about the future of Elderton. She could have easily thrown it all in. She didn't! In 2000, Lorraine's eldest son Allister joined Elderton and was followed in 2003 by younger brother Cameron. During this conversation of the history and story of Elderton is when one of the great wine stories was told. The Ashmead boys in an effort to show their love and appreciation of their mum wanted to do something big for her 60th birthday. Mum was not going to have it. She even took a trip from Australia to New York to make sure they could not pull off any surprise. They somehow figured out where she was eating her birthday dinner with a friend at and had a bottle of wine delivered with specific instructions to the restaurant to only open the sent bottle no matter what she ordered. What wine was so special you wonder. They put  together a new label 'Ode To Lorraine' to honour their mum. It was a huge surprise given she had refused to sanction the idea time and again. The thought was beautiful, the execution amazing and a great story. Oh by the way it is also a great wine. Get some! I did!

After a while we drove through the estate vineyard on the way over to the head office and into the wine making facilities where we ran into Richard the wine maker. A tall affable bloke who likes a good laugh and it seems is up for about anything.

After some laughs Richard was back to work as was Cameron and Allister and I continued to look over the facilities. They have a lot of the usual suspects with Stainless steel tanks but also have a series of very cool open top concrete fermenter tanks. While looking at the concrete tanks from the elevated walkways a massive grey spider the size of a Labrador was standing menacingly on it's hind legs on the handrail just behind me, lunging at me with it's vampire fangs. Lucky for me Allister moved me away before I knew what was behind me otherwise it would have been shear panic. I would have thrown my upper body backwards, while my feet continued to stay put, catching on a little too late, resulting in something that makes me look like the victim of a slide tackle pushing me feet first under the gigantic spider with my arms flailing and me screaming like a girl as the beast leaped down and consumed me. Ok perhaps a little dramatic but probably not far from the truth, at least the panic part. Thanks for the calm save Allister.

From the crush, press and tank area we walked alongside the famous Elderton Vineyard which dates back as far as 100 years and past the house where Cameron and Allisters Mum, Lorraine now resides to the barrel warehouse. This is a state of the art insulated temperature controlled facility with approximately 800 barrels stored here.
The Cooperage they use is a local with a ton of history by the name of A.P. Johns. Think a visit may be in order.
The John family began operating as coopers late in the 19th century when Christian Paul John established what was then the Chateau Tanunda Cooperage in 1889. His son, Arthur Paul John (who the business is named after) continued in his father’s trade, establishing the original A.P. John cooperage on the current Chateau Tanunda site where it operated until moving to the current site in Tanunda in 1925. AP John Coopers range of French and American Oak Barrels can be found in the cellars of premium winemakers throughout Australia, New Zealand, South Africa, California and Spain.

From the barrel storage building we walked back to the cellar door to taste a selection of Elderton wines. Allister talked and tasted with me through a range of Elderton wines starting with delightful Riesling from their Eden Valley vineyard. This light aromatic drop was the perfect starter. While this vintage is sold out the 2014 is due for release in May 2014. Next up was the Eden Valley 2012 Marsanne Roussanne. This was the first release of this Rhone blend and they hit it out of the park (hit for 6). I tasted through the Eden Valley 2012 Chardonnay, Eden Valley 2011 Shiraz, Elderton Barossa 2010 Zinfandel, Western Ridge Barossa Valley Grenache Carignan, Elderton Barossa Cabernet Sauvignon 2010, Elderton Barossa Shiraz 2012 all truly nice wines at very good prices, mostly **** and a couple low *** bottles. Very impressive line up. But wait we were not done, Allister was about to shift into top gear (pun somewhat intended) as he poured the 2010 Barossa Valley Niel Ashmead Grand Tourer. Wow this was a great drop. First released from the 2008 vintage, the Grand Tourer Shiraz is named after and produced in honour of Elderton co-founder, Cameron and Allisters father, Neil Ashmead. Neil was a ‘Barossa Road Warrior’ like none before. Driving tirelessly from city to city with his car loaded with wine, doing tastings and dinners with whoever would listen, and talking up the Barossa. It was his love of  fast cars that made this process a little easier and so the unusual choice for the name of this Shiraz. Great drop.
Next up was the 2009 Ode To Lorraine. The Ode to Lorraine is a blend of the finest barrels of each of the Elderton Estate varietals. The wine making team at Elderton believe this is truly the hidden gem in the Elderton portfolio of premium reds and based on it's *** price I would agree. A fantastic blend of 66% Cabernet Sauvignon, 25% Shiraz and 9% Merlot, the 2009 Ode to Lorraine has a deep garnet-purple color and giving generous purple fruit characters, spiciness and generous length. Brilliant (purchased one of these. Loved the story and the wine). The last of the reds to be tasted was the Iconic Command Single Vineyard Shiraz 2009. The vineyard that this wine is made from was planted circa 1894, classed as a centenarian block by the Barossa Old Vine Charter and is one beautiful Shiraz. Allister and Cameron had explained to me that as the current custodians of this rare piece of Barossa Valley viticultural heritage, it is their mission to continue their parents aspirations and expectations and to produce a truly great wine. The Command is an expression of place, and one which the family intends to preserve for generations to come. This is a great wine that delivers in splendid fashion. Well done boys!
The tasting finished up with the most delightful 2012 Golden Semillon. This is a wonderfully fruit sweet dessert wine that will have you coming back for more. One well know wine writer from Australia summed it with one word, Yum! I could not agree more Winsor.

Thank you so much to Allister and Cameron for their generosity and sharing of their time and wine. The telling of company history and sharing of wonderful family stories. The use of the wonderful Elderton Lodge which was a perfect base while visiting the Barossa Valley.

Watch the video above. It is great...

A couple of top blokes who have great wine and a lovely cellar door that you need to visit. While you are there say g'day to Tush. Better yet, book you and a few friends to a Master Class Tasting at the Cellar Door and experience some great Australian Wines, let me restate that, some 'truly great wines'.
We highly 'recommend' you do!

Ran into Cameron and Allister at Adelaide Airport when they were on their way to Asia to meet with distributors and got to say g'day again. Thanks again guys! Cheers!

Wine available on their website for Australian shipping at  http://www.eldertonwines.com.au/
In the USA you can order their wine here http://www.solawines.com/
Posted by Winewalkabout at 1:28 PM