A taste of Paris, yum! 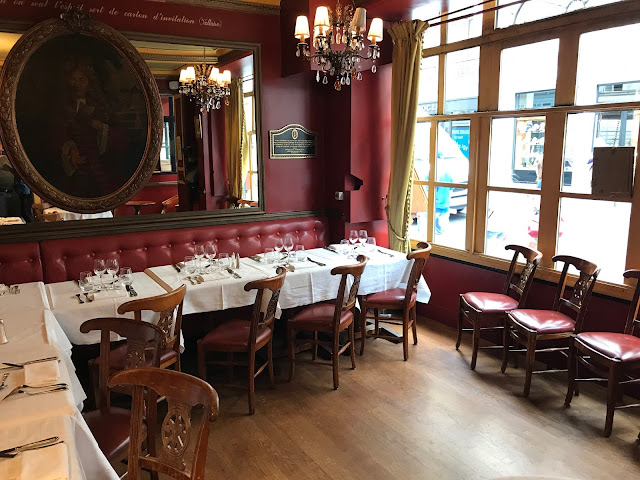 Ah the smell of pastries in the morning. We arrived in the lobby of the Hotel and met up with our other Viking guests all eager to get 'A taste of Paris". We were loaded on a fancy little bus and whisked away towards our gastronomic adventure. 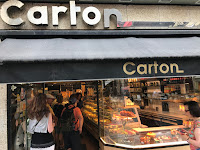 The first stop was just as you would imagine. A wonderful bakery called Carton, located at 6 rue de Buci. We could have spent days here tasting all they had to offer. Making a decision of what to get was almost impossible. The final agreed upon selection was an amazing chocolate eclair. Mmmmmm mmmm good.

The first impulse was to continue to buy and eat everything we could carry but were reminded we had a number of places to go and to curb the desire to stuff ourselves. 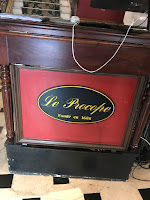 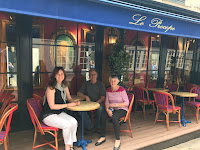 The walking between stops was also wonderful. We stopped and looked at and learned about many interesting places along the way. Some amazing old buildings and places.
One was a famous old Restaurant Le Procope founded in 1686. It was an amazing facility and hope to enjoy a meal here on a future visit. The Le Procope is the oldest café in Paris and after taking a peek inside and at the menu, the prices look quite reasonable for such a place and the ambiance looks amazing. 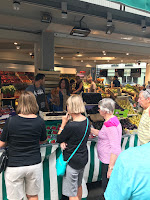 Next stop was a fruit and veg shop on a corner in Saint-Germain-des-Prés. Here we tasted some of the most delirious cherries I have ever had. 500 grams later I had to use every bit of self restraint not to get another kilo!

As we explored this area in Paris we were amazed at the history and the warm feel of the streets. In the years after World War II, Saint‑Germain‑des‑Prés was known primarily for its cafés and its bars, its diversity and its non-conformism. The bars were a popular destination for American soldiers and sailors after the war. 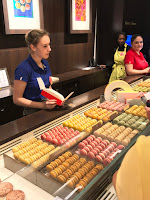 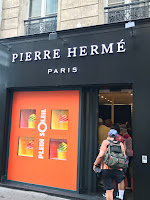 After those amazing cherries it was not just any Macaron store but the world famous Pierre Hermé, home of the worlds best Macarons. Macarons are not the only treat they make. Some of the most artistic and beautiful deserts ever made reside here. We all selected our flavor Macaron and continued on our way.

Our next stop was at Tomat's Epicerie Fine (fine grocery). This magical off the beaten track store, which smells of olive oil and pepper, depending where you stand, is tucked into a tiny cobble stoned courtyard. Some interesting discoveries were woven vines of bright red Espelette peppers, pots of chestnut honey, silver containers of finishing salts (including black and white truffle), chutney, juices and blue bottles of Azzurra mineral water from the Dolomites. Interesting wines and one that had been aged under the ocean for a year. 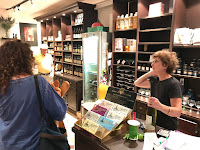 There are mustard's, olive oils, crackers and foie gras too. The selection is large enough that you can outfit yourself with gifts for friends at home, aperitifs in your Paris apartment, and a hostess gift for a friend. We tasted some lovely wines and some foie gras blended with duck pate as a pairing. Such a cool place and did I mention it is off the beaten path! 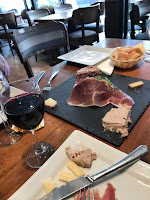 Our final stop was at Le Pré aux Clercs. A charming bistro at the corner of the Rue Bonaparte and Rue Jacob, in the heart of Saint Germain des près.

We enjoyed a wonderful charcuterie board and some wine. We also enjoyed just sitting and watching Paris wander by.

It was a hot and muggy day in Paris but we all really enjoyed the wonderful samplings the city had to offer. The Viking tour guide was fantastic and we all agreed it was a special day. We would all do it again in a heart beat. 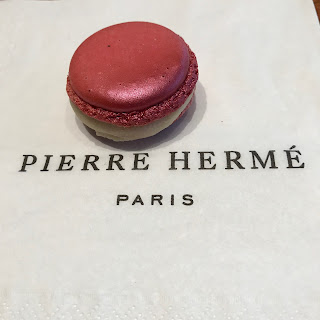 WineWalkabout
Posted by Winewalkabout at 2:27 PM