As Saturday morning rolls around we are OK with the fact that they are not planning on engaging in any drinking activities. This morning we are taking the girls and dropping them off to see “Cook like a rock star” with Anne Burrell. Having seen Guy Fieri last year I was sure they would enjoy the show. So like the attentive considerate gentlemen that they are they accompanied the girls to the event and waited in line with them. Acquiring them some water from the Fiji Water people and delivering delicious and tasty strawberry, blueberry and raspberry samples from the Driscols table while they waited. Come on everyone say “aww”. Yeah yeah, so at the scheduled time of the event start we were all still standing in line (having already been waiting for over 30 minutes). Now most events let you in about 5 minutes prior to start and by 5 after its go time. 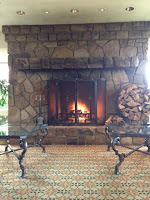 This event let them in 10 minutes after the scheduled start time, so a good 45 minute wait. Leaving the girls to enjoy the show we decided to enjoy a good size cup or many small cups, depending on availability, of coffee at the inn at Spanish Bay. Finding said good size cup they found a nice spot across from an open fire and quietly enjoyed their coffee while planning an adventure for when the girls came out of the show in approximately 30 minutes. It was shall we say an unexpected and disappointing surprise that the girls called 45 minutes after the scheduled start (remember they went in 10 minutes late) to say the show was done. Now while the girls were thrilled with the show and thoroughly enjoyed it, we were a little disappointed in that the event was less than half of the hour and fifteen minutes that was advertised and paid for. The other thing that’s a bit annoying is that you can buy the book for the chef you paid to see while you wait, but they will not sign it at their event. No, after the 30 minute rush show Ms. Burrell was out the back faster than a tick off a sheep’s back in the dip trough. You have to buy the $200 ticket to the Lexus Grand Tasting for that day to get the pleasure of waiting in a queue to get their signature. Now this got us to the Grand Tasting the previous year, but this year the Saturday event was sold out, so how was one to get the book signed? 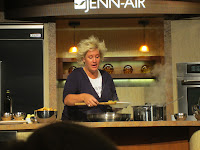 To be fair to Ms. Burrell, the timing of the show is handled by someone other than the celebrity. They are just shuffled from one thing to another and a handler gives them the “start now”, the “hurry up” cues and the, “we need to be somewhere else” hustles.
That being said a 30 minute show instead of a 75 minute show is significant and we were not impressed. Besides we had not come up with an adventure for the day yet and now the pressure was on! So with hot chocolates all round, some fast thinking, and almost as fast as the girl’s event we had a plan. By the way the hot chocolates were deemed a, 9 on the Official Winewalkabout scale and ****. 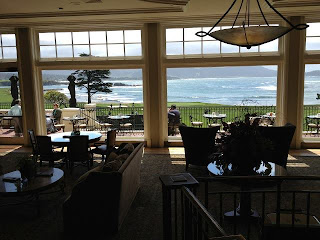 The adventure for the day was a nice drive along the spectacular coastline and then to the Pebble Beach Lodge for lunch at the Stillwater Grill overlooking the Pebble Beach Golf Links 18th green, and a walk around. The lunch was good with either fish and chips or burgers ordered. The seating was lovely, the service was excellent and the view was amazing. Adventure success was completed with a walk around the grounds and out to Stillwater Cove to take in the amazing view. A great finish to the day.

Stay tuned, next up Lexus Grand Tasting on Sunday! 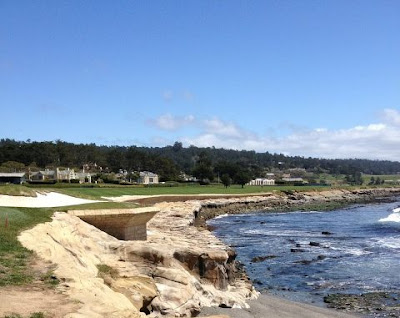 Posted by Winewalkabout at 2:08 PM