WineWalkabout at Pebble Beach Food and Wine 2012 the Trilogy! 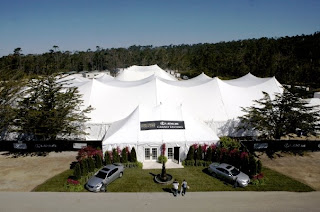 Sunday morning arrived and I with my intrepid band of drinkers and foodies headed out to the Pebble Beach Food and Wine, Lexus Grand Tasting in Pebble Beach. Arriving a little early at Spanish Bay they caught the shuttle over to the event. Arriving a good 30 minutes early, our band found themselves at the end of a line of a couple hundred eager excited people waiting to get in. The event was close to a sellout, and probably with door sales, sold out or very close to it. A couple of minutes before the hour the crowd which had now grown to, well a lot, maybe 1,000-1500, were allowed to start entering. 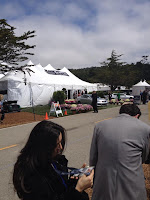 The process was fairly well orchestrated and within minutes they found themselves being handed their very own engraved Pebble Beach Food and Wine glass as they entered the 66,000 sq ft tent. Entering the tent is a bit overwhelming as there are so many wine and food stops one could make. So like kids in a lolly shop, off we went, and while 3 hours seems like a lot of time, it’s not. I had done some homework and had a list of a half dozen wineries that were of interest. Not just for tasting but also just to say g’day. This is one of those events that spitting discretely is a skill that would serve one well. However having said that, and not having that skill, it is also a place full of people who you may not want to see with wine stains down your shirt. Small tastes, small tastes. Don’t taste anything that you already know, go for the new. That was the mantra. 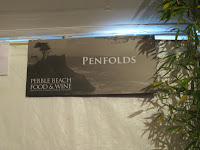 It was hard because there are so many familiar and great wines at this event. There are also hundreds of new ones to experience. There are also quite a few, who do not offer tasting of their wines other than at events like this. So that is a good reason to track them down for a taste or two. There were 300 wineries represented from all over the world as well as some premium beers, Vodka and Rum. The thirty or so Chief’s had all kinds of tasty nibbles to sample, and due to the fact there were so many of them, there was rarely much of a line to get yourself something good to chew on.
So I was off and flat out like a lizard drinking, trying to taste and explore as many wines as possible, while trying to stay focused on the mission and without ending up needing assistance. Look there were many good and great wines at the event, and in the near future we will be doing some up close and personal reviews of what they have to offer.


As this is being written, WineWalkabout is trying to arrange to visit some of these producers of fine wine and not only tell you about the wine they have on offer, but something about their vineyards, winemaking philosophy, and the people themselves. So stay tuned. (Teaser alert... Pisoni wines from Monterey County, Hunt Cellars from Paso Robles for starters) 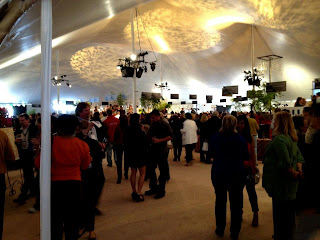 While $200 seems like a chunk of change to taste some wine and have some snacks, fancy as they may be, but this truly is an amazing afternoon and worth the price of admission.


So mark your calendars and see you all there next year!

Email ThisBlogThis!Share to TwitterShare to FacebookShare to Pinterest
Labels: PBFW 2012