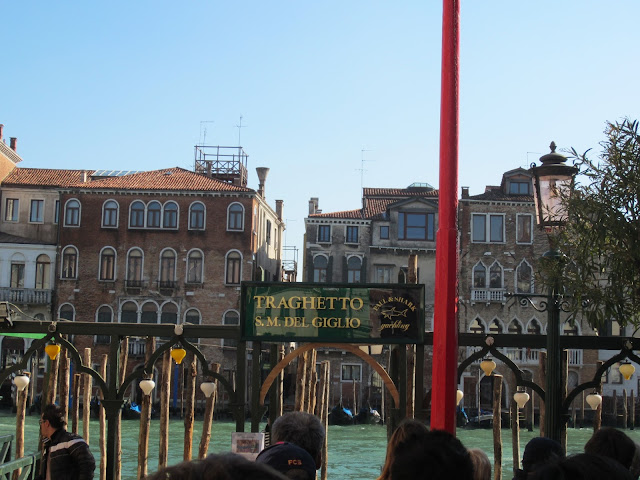 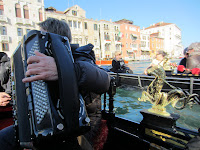 What is more romantic than meandering through the canals (large and small) of Venice in a Gondola, with an accordion playing music and an Italian bloke singing all those classic Italian love songs you have heard while watching every movie of Venice. As cheesy as it sounds it was wonderful. Booked through isango.com prior to leaving the USA was not just a Gondola ride on the Grand Canal, but also a Gondola ride through the narrow canals off the Grand Canal including being accompanied by music and song. To say some of us were excited was like comparing our state to when you hear the cork pop on a sort after wine and waiting to get a swig. 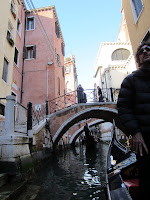 We were early to the meeting point as getting lost is our forte and so this time our focus on the map paid off. We found a nice restaurant in a hotel on the water front of the Grand Canal to have some lunch and a glass or two but as we started to pa-ruse the menu it became apparent that this was not the place for us with simple mixed green salads starting at twenty three euros. With our tails between our cheap legs we wandered about half a block to anther establishment. This was more to our liking. Still able to see the canal about a sixty meters away but at half the price. The place was the Ristorante Giglio. 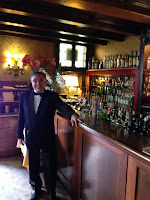 We enjoyed a great meal (pork chop was amazing) and some nice wine at a very reasonable price for the location. The staff were wonderful and spoke enough English to make order adjustments and menu and wine questions easy to get answered.

After our nice lunch we wandered over to our Gondola experience which was booked using Isango and checked in with some time to spare to get the lay of the land. It was then that things went south! Going through all the packets of the backpack and jackets the realization that the voucher for the ride was not to be found sunk in. The instructions received in the confirming e-mail had said to print and present the paper voucher upon arrival. Now what? Light bulb goes on... the I-phone has the conformation e-mail on it. It is good enough for international travel and renting cars and booking and checking into hotels. No worries right? WRONG! No paper no ride! Of course this comment was delivered with all the dismissive arrogant tone and body language the Head Gondolier could muster before turning on his heels and walking away. There the four of us stood like scalded children who are now not getting in to Disneyland. Rules aside, the handling of the situation was not professional at all. 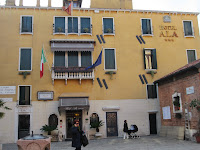 Another spurt of brain activity and off to the Ristorante Giglio for help. Did they have internet access and a printer? No, but recommended the hotel just around the corner (quick thinking). Running in to the Best Western Hotel Ala they could see a little panic in my eyes and were quick to try to help. The first plea for a computer with internet access and a printer was a bit of a no go, but one of the staff thinking clearly suggested that I email the voucher to them and they could then print it for us. Brilliant! It worked and our Adventure was back on. Thank you to the reception staff of the Best Western Hotel Ala for helping out. True class! I did not even need to mention that I am a member. 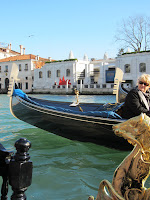 The Gondola ride was on and the four of us were loaded in with the musician and the singer (sweet). A small flotilla of Gondolas were being gently paddled down the Grand Canal to the sounds of the accordion and the crooning of our vocalist. It was, it was as it should be. Every face you looked at was beaming with big smiles and the giddy excitement most of us don't feel often enough. After about fifteen minutes all this happiness was  then moved to the small narrow canals and took on a more intimate feel although with no less smiling. The echo of the music and song were transporting to another time but the place was somehow familiar. 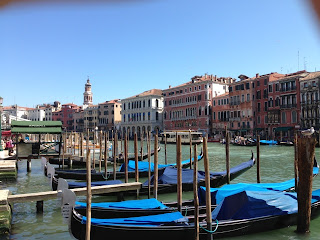 While somewhat predictable, and as corny and cheesy as you like there was no getting away from the fact that most of the people on this Adventure had not smiled that much and that big in a long time. Cruising the Canals of Venice was a truly wonderful experience that everyone should do once!
While our overall experience was marred by an arse before the start, the ride, the music, and the singing were everything you could hope for. So a bit of a different endorsement here; if you have traveled far to experience this place called Venice, you "Must do" a Gondola ride with a serenade, but perhaps from a different dock and as the singer and musician were fantastic,hopefully they work for multiple Gondolier locations.


We did get a response to our survey which is good as it shows they are at least reading them. You can make up your own mind as to the quality of the response.

We have received a review from your side that the you faced some trouble in printing out the vouchers. We would like to inform you that the e-vouchers that we send you are a very important document and to avail the tour it is mandatory to carry the physical copy of the vouchers as they need to be exchanged with the local partner in order to avail the tour as they are also essential for our internal documentation purpose
We do not mean to hassle you in anyways as its mandatory part of our process that is why the local partner insisted for the paper work
We hope you would understand our concern
In case of any further assistance please feel free to contact us
Thanks and Regards
Aanchal
Isango! Support
Posted by Winewalkabout at 12:56 PM