Pisa, yes the Tower is leaning... 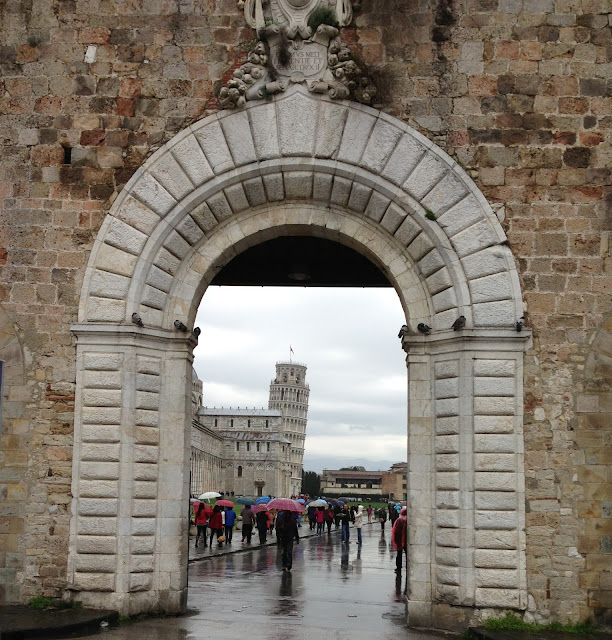 Planning a visit to a world wide iconic landmark is a little scary. What if the photo's have been, you know, enhanced, like most of the Cinque Terre ones see. You have all seen numerous pictures of the Leaning tower of Pisa and the surrounding buildings, and yet, if you had the opportunity you couldn't pass it up right? 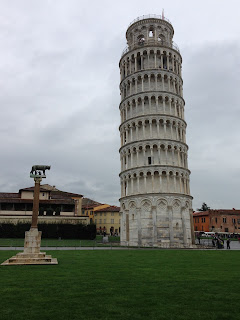 But what if it's just like the pictures and that's it? Well, we are here to tell you, it is just like the pictures, and for the most part it is just what you expect. In saying that though, there is a majesty and feeling of amazement when in the presence of this amazing structure, that no picture or movie will ever emote. Climbing a leaning narrow staircase is an Adventure in of itself, and to climb the 297 steps in a row to the top, well we were just glad it was winter and quite cool. In summer it must be one sweaty process. But don't miss out, just go early in the morning.

The unsettling off kilter feeling is secondary to the realization that you are climbing on marble stairs that are as much as 940 years old. 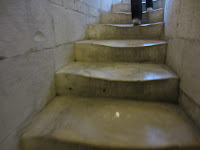 Here is a little of the history of this amazing structure. The Leaning Tower of Pisa is the freestanding bell tower of the cathedral of the Italian city of Pisa, known worldwide for its unintended lean. It stands at 60 metres and until 1990 was leaning at about a 10 degree angle. Although it was designed to be perfectly vertical, it started to lean after about five years at the same time the third floor was being added. The tower is one of the four buildings that make up the cathedral complex in Pisa, Italy (they all lean a little), called Campo dei Miracoli or Piazza dei Miracoli, which means Field of Miracles. The construction of Tower of Pisa began in August 1173 and continued for about 200 years. It was finally completed in 1399. Until the latest corrective construction brought the lean to a stable angle of 5 degrees tourists have not been able to climb the 297 steps from the bottom to the top of the Pisa tower for quit some time. 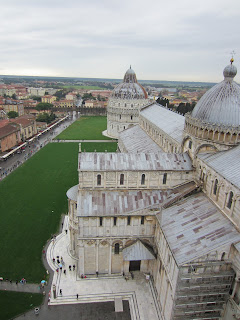 A great half to whole day Adventure, and even though it will be what you expect, you will marvel at having actually been there and climbed to the top. If you look closely once you have exited from the interior staircase to the exterior staircase up to the bell area, as you are about to duck to enter these last stairs, on the archway is a forehead impression that Koala left when he forgot that the Italians who built the tower only allowed for short people access. (Crikey that rang my bell)

After the tower Adventure is a good time to check out one of the local cafes and do as the locals do and have some wine and and pasta or pizza, then finish up with some dessert and a favorite coffee. Try Pizzeria La Buca and take advantage of the free WiFi like Koala did. Kiwi and the girls left Koala here as they walked to the river and back while he recovered from the flock of birds circling around his head. Not wishing to waste an opportunity he did as the locals do and enjoyed some wine and food as well as coffee's all round when the group returned.

Don't be afraid and miss out if the possibility exists we 'recommend' you check out The Leaning tower of Pisa.

And yes we did take the obligatory holding the tower up pictures! 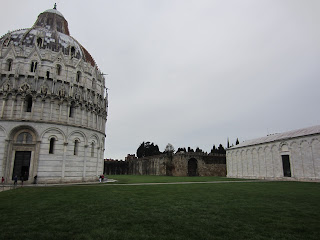 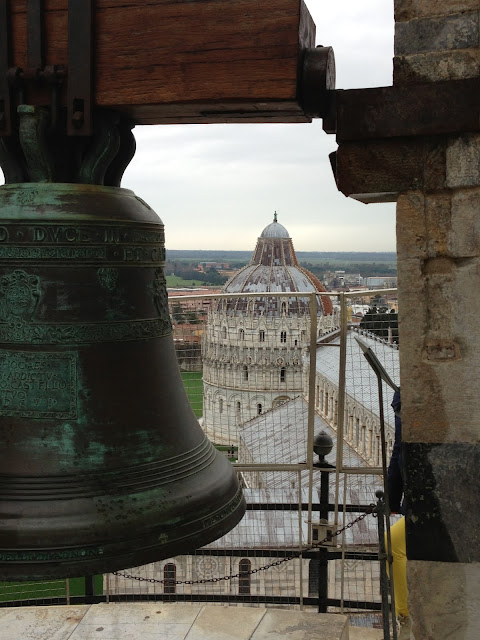 Posted by Winewalkabout at 8:59 PM