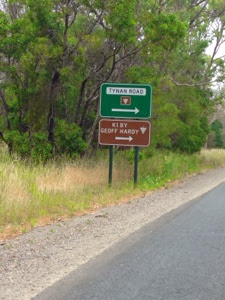 After spending a little time with Geoff Hardy at the Uncorked event at the National Wine Center I was very excited to get the opportunity to spend some time with him at the K1 by Geoff Hardy property. 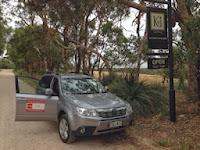 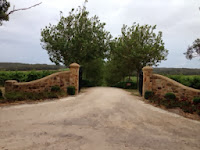 The property is at the southern end of the Adelaide Hills wine region and a little off the beaten track. As I followed the map to the property I drove by the spectacular Kuitpo Forest. The Kuitpo Forest Reserve covers an area of some 3,600 hectares, of which 60 percent is softwood plantation. The area is used for camping and hiking as well as many other activities. 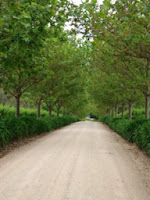 Following the signs I turned off the paved road onto the gravel and was thinking that this was more off the beaten path than one might anticipate. Well I need not have worried as the entry drive set the stage for what is one of the most magical settings for a Cellar Door that I have experienced. This is not just my opinion as the Cellar door is also ranked as one of Australia's Top Ten Cellar Door Experiences by leading wine industry journals.
As you descend down the long driveway, you are greeted by a majestic lake and building. 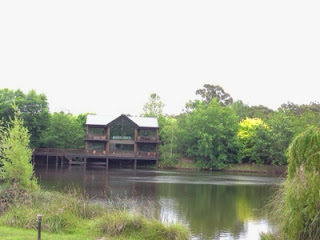 The day I was there was rainy so my pictures are a bit drab but even in the rain this was a place that made you feel at home or at least that is, what you wished were home. After parking and as I walked to the Cellar Door the beauty of the location and the closeness of it were magnified. Walking up on the deck that overhung the lake just made you want to smile. I stopped for a minute in the rain and just took it all in. 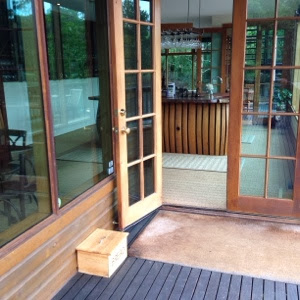 The Cellar Door is a unique lakeside tasting room with the centrepiece of which is a hand crafted tasting bench made by Geoff from 400 year old Red Gum from his Limestone Coast vineyard. It is such a beautiful piece of timber and adds so much character to the tasting room and to the tasting experience. Absolutely beautiful.

In 1987, Geoff Hardy who is a fifth generation descendant of the South Australian wine pioneer, Thomas Hardy, finally found his ideal site for the production of cool climate grapes in the Adelaide Hills. 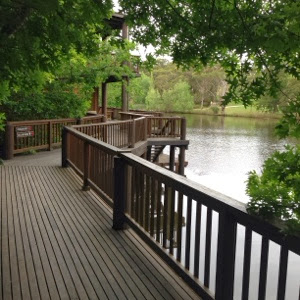 The vineyard became known as the K1 Vineyard as this unique groundbreaking site was the first commercial planting of vines in the Kuitpo (pronounced 'ky-po') region. Get it K (kuitpo) 1 (first).

Throughout his career, Geoff has been involved in the planting of more than 3,000 hectares of vines and has consulted to more than 200 different vineyards in Australia, France and Italy.

I was greeted at the door by Sebastian, Geoff's son, whom I had also met at the Uncorked event. Did you see Dad, said Seb as we exchanged pleasantries? I had not, although I did notice a Range Rover parked off an embankment.
Turns out that was Geoff out repairing some irrigation piping. 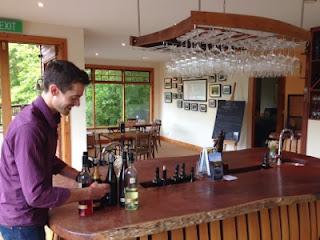 When you meet Geoff and shake his hand you quickly realise that these are the hands of someone who works them daily. Geoff is also a very focused individual and he believes that in order to produce high quality wines it is essential that the people involved are not only skilled, but also dedicated. Having met his winemaker Shane Harris, it is clear that the winemaker fits this profile. With 10 years of experience in the cellar Shane believes in earning his stripes, starting as a cellar hand and spending many long nights studying the science of wine in the pursuit of his winemaking goals. 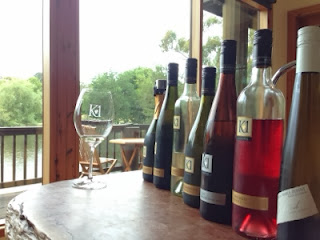 After having been involved in the K1 winemaking since 2006, Shane was appointed Senior Winemaker in 2011.
Shane says he relies on the vines to translate the unique message of the vineyard into something tangible and sees his role as "not losing the message between picking the grapes and opening the bottle".

Seb set up the bottles for tasting in their spectacular tasting area on that amazing piece of beautiful Red Gum. A spectacular piece of Australia right there. 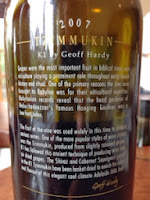 We started with some of the K1 2009 Vintage Sparkling and proceeded through the lovely 2013 Gruner Veltiner. Next up was a first as having never tasted this variety before. The 2012 Arneis. Arneis is a rare variety originating from Piedmont in Northwest Italy. After WWII Arneis almost became extinct as it is notoriously difficult to grow. Next the very nice 2012 Chardonnay, the impressive 2011 Riesling / Gewurztraminer and the delightful 2013 Rose finishing the whites with an amazing 2010 botrytis. After a bit it was onto the reds. Tasted 2010 Pinot Noir, 2009 Merlot, 2009 Shiraz, 2006 Shiraz, 2009 Cabernet Sauvignon and the 2007 Tzimmukin. All these were very nice to extremely nice but the one that caught my attention was the Tzimmukin. In biblical times the fruit of the vine was handled in many ways to produce various styles of wines. One of the more intriguing wines created was the 'Tzimmukin', using slightly dried grapes to increase strength and longevity. At K1 they have tried to capture the essence of this ancient technique by slowly air drying their best parcels of Shiraz and Cabernet Sauvignon in baskets to produce a wine of intense flavour and complexity (purchased one of these for myself). 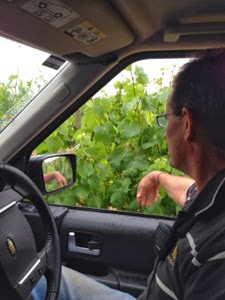 After an engaging, delicious tasting Geoff took me on a tour of the area. As we drove through the vineyards and around another of the lakes on the property, Geoff's love of the land and his passion for what he is doing is absolutely infectious. He is in tune with every vineyard area we went through and knows which ones the roo's are enjoying, which ones need some TLC and which ones are showing great potential for the coming vintage. For lack of a better description, it was such a cool experience cruising around the vineyards and checking out Geoff's new house and just generally hanging out. We even collected and delivered a case of wine while out and about. Geoff showed me the lake, beach and island where they have a summer event and paddle boat race that he said is one of his favorite events. We went to the storage shed and checked out the restored car that is used for parades and the like. 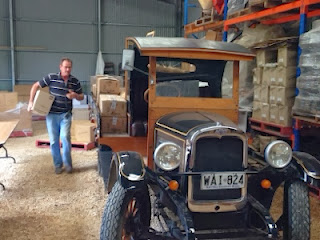 I asked Geoff what he may be doing if he were not doing what he does and the answer was designing golf courses or landscape projects. I also asked what he thought set the seed for this love of vineyards. He attributed it to the days of family picnics with 60-100 people in the vineyards having a great time. Those were the days and Geoff tries to continue those great events with events similar on the property. Can only hope to be able to attend some in the future as they sound fantastic.
Geoff also tells of how he got a green thumb early, when doing a trade apprenticeship he was growing vines on the side.

This is an amazing property with a magnificent cellar door in one of the most beautiful spots you could imagine and to top it off with great people and great wines makes this a 'must do' if in  Adelaide.

Geoffs vision is to bring the family together in the family business (check) and to get the best expression of the terroir into his wines (check).

A personal thanks to Seb and Geoff for taking time out of their day to let me hang. Brilliant! 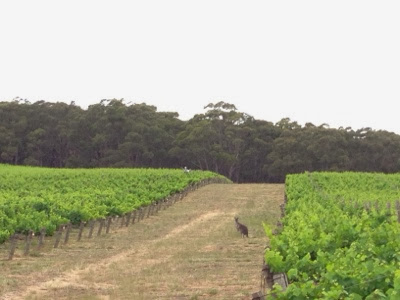 Posted by Winewalkabout at 2:19 PM