Shrimp on the Barbie, Kiwi style at Croad in Paso Robles 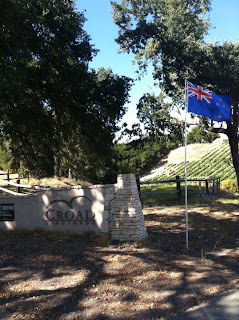 It's not that we race back to the same winery twice, but for Croad Vineyards we made an exception! We wanted to show off our new find to our American friends. Actually one is French-American, so  we could call this the "Kiwi, Koala, and Frog,  er..blog". I give up.  No, that's a French line. Anyway, the owner of the winery, Martin Croad is a Kiwi (from New Plymouth) so having visited earlier in the year, showing friends that Kiwis could make, as well as drink wine seems a good a reason as any to come back! Besides we were in the area.
Another beautiful Paso day, and we were warmly greeted by Nicole in the tasting room.  She called Martin to say she had Kiwis in the house. He said great, I'll be right up.  Then she said one was actually an Aussie. We all heard him say "call security" over the tiny phone speaker (not that funny).

Soon we were basking in true Kiwi hospitality, sipping through his delicious red wines - 2009 Pure (syrah), Rei (cab franc, syrah) and Taranaki (Zinfandel and mourvedre). Later we were spoiled with his GSM. All were enjoyed (by some) with crackers dipped in Vegemite.  Yum.  Made Kiwi and Koala homesick.  Made Froggie sick.  It was all so good Kiwi joined the "Kia Ora" wine club.

We must have made a good impression because Martin invited us to their Summer BBQ the following night.  The two of us (Kiwi and Koala) being invited back rarely ever happens!  Resplendent in his Kiwi decal tattoo from Croad, Kiwi arrived with Koala and the significant others in tow. The place was humming, and the first pour was a New Zealand style Sauvignon Blanc. Delish, and refreshing for a warm summers day, overlooking the beautiful Templeton Gap. 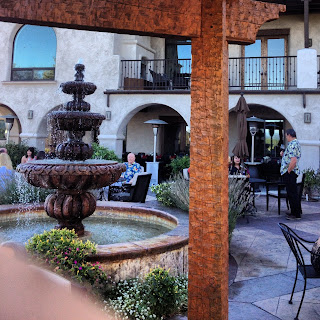 Appetizers included a dish neither Kiwi nor Koala had ever had at home. Barbecued shrimp. Who knew. No, seriously never ever growing up had either one of us thrown shrimp on a barbie! Thanks to our good mate Paul Hogan that has now change the perception of Down Under BBQ's for ever. Then we all sat banquet style and enjoyed great BBQ fare with chicken pieces and pork ribs, meat falling off the bone. All accompanied with Croad Pure, Rei, Taranaki, and GSM wines. And least we forget a great rendition of the Star Spangled Banner by the Singing Orthodontist.
Doesn't get much better than that!
Chris and Trev (Kiwi and Koala) would have stayed until Martin kicked us out, or the wine ran out, but luckily our better, smarter halves made us leave at a relatively respectable time.
For everyone visiting Paso Robles we 'recommend' a visit to Croad and to meet Martin. Nicole is awesome running the tasting room.  So belly up, dip a cracker in the Vegemite tub, and tell em Kiwi, Koala, and Frog sent ya. 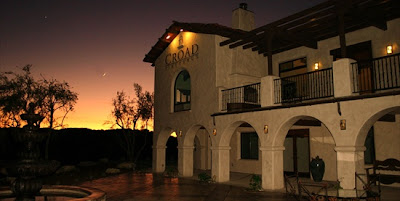 Posted by Winewalkabout at 9:55 AM