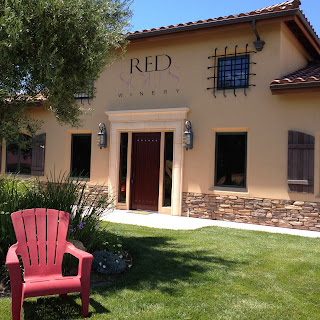 This is the story of a couple that farmed vineyards and who were bitten by the wonder of what they could do with their own fruit. Working for other was great, but they wanted to try it on their own.  The first vintage was such a small beginning that they had no crush equipment and used the romantically traditional method of their own four feet. No they don’t each have four feet, two each. That process lead to the name of their label as they observed their red stained feet.
It was an epiphany to call it Red Soles Winery. That first small crush of Petite Sirah and Zinfandel grapes was later to become their premier vintage, their 2004 Kick-Off. 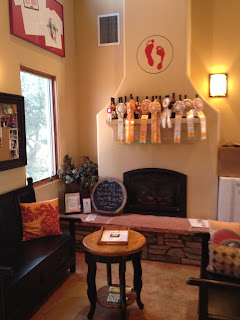 As Kiwi, Koala and guest taster Frog (and their significant others) all wandered into the tasting room they all commented on how comfortable it felt. The size is small by some standards but could easily handle twelve tasting with two serving. The tasting room has a nice layout with a fire place and a couple of sitting chairs for the designated drivers to kick their heels back and compare notes on their drinkers. They also have a nice selection of souvenirs should one feel the need.With a good selection of wine’s the tasting started. It was unanimous that there was not a poor one in the lineup. All the wine was well received and purchases were made. Kiwi purchased a 2009 Syrah and a 2009 Reserve Cabernet Sauvignon. Koala purchased the 2010 Kick-Off. This is a representation of the first release, hence the name Kick-Off. A story too good to ignore. Koala loves a good story. 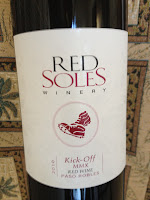 A Blend of 50% Estate Zinfandel, 25% Estate Petite Sirah and 25% Old Vine Petite Sirah, a solid 6 and ***. Frog also purchased. All wines were great now out of the bottle, but could also be cellared for several years (if you can stand the wait!).  All in all a great tasting experience with a knowledgeable and friendly attendant and a selection of good wines that would make any tasting group happy.
They are conveniently located on the beautiful Westside of Paso Robles, just 3 miles from Hwy 101, on Oakdale Road, and just several hundred yards from Hwy 46 West. Open Daily from 11-5pm.
Red Soles is closed on all major holidays and Super Bowl Sunday.

So stop on by and tell em Kiwi and Koala sent you. Oh and Frog to! 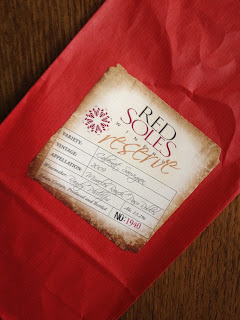 Posted by Winewalkabout at 10:18 PM