The Menzies / Yalumba in Coonawarrra 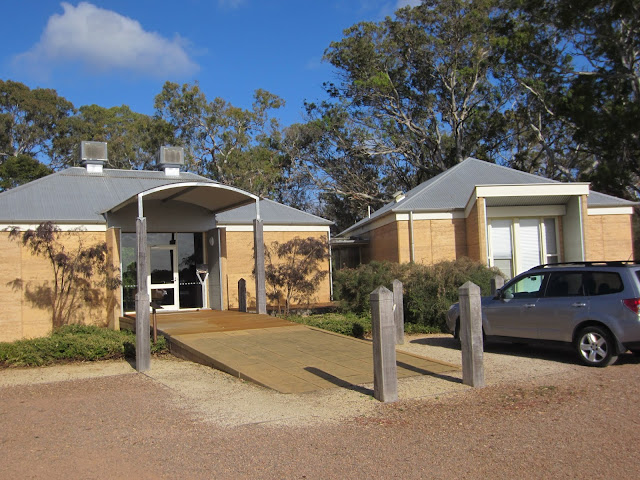 Planning a visit to the wine regions of South Australia was a daunting task. Planning a trip to a region that you have not been to is even more daunting. I had tried to book a couple of places with no luck but was able to get connected and booked with the Menzies Retreat at the Yalumba Cellar Door in Coonawarra. People say (you know, people) that things happen for a reason, and even though my heart had been set on another place to start with this worked out perfectly. 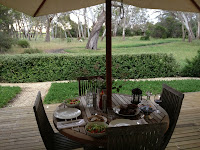 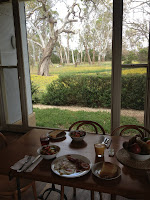 Whatever the reason, it happened, and it could not have been better. The Menzies Retreat is a super nice well equipped, beautiful, comfortable, serene and magical place to stay. It all fell into place when I was put in contact with Claire Gleeson, the Menzies Wine Room and Retreat Manager. Claire took care of all the details and the stay was brilliant. The resort is a two bedroom large apartment style place immediately adjacent to the cellar door. This roomy, fully self contained B&B has everything anyone could need with the only possible thing missing being a washer and dryer. 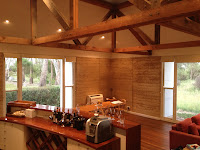 The Menzies Retreat is a truly wonderful place to spend some time barbecuing on the deck or sitting on the bench out in the native scrub listening to the birds and trying to catch a glimpse of the local wallabies. If you prefer to look at nature thru the window, you can make an espresso with the fancy coffee maker or have a glass of wine and sit inside and look out into the scrub or the vineyards or both even at night with the exterior spotlights. I barbecued the first night and we ate out on the deck while enjoying a glass of fabulous Yalumba wine, the Menzies it was. Just by chance (if you believe that)! The place is totally stocked for breakfast and that’s just what was needed prior to venturing out into Coonawarra to try some of the other area wines. One has to do the work you know. 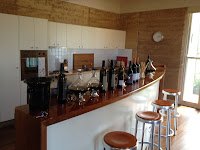 Checking in was a breeze and Claire had set up a tasting of some Yalumba wines for us. She had also brought along the vineyard manager James. This is also where I  was introduced to the Wrattonbully area wines (story here).
Claire and James put on a fantastic tasting of some of the Smith & Hooper wines from Wrattonbully as well as some of Yalumba’s premium wines. The tasting was done in the Menzies Retreat which just added to the atmosphere and special nature of the tasting. 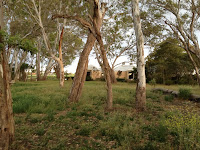 The Menzies and the Cigar were my favorites, and bottles were purchased at checkout to take back to California to share with that Kiwi if he can behave. While talking with Claire and James, I was impressed by their passion for what they do and a pride for whom they do it for. The Yalumba Company is Australia’s oldest family owned winery and there must be something more than stuff to their success. We can only surmise, that the family has inspired the people that work for them to have a passion for what they do that is rare, and that it is these amazing people of Yalumba that feel a part of the legacy and of the future, that makes this such a successful and innovative company. See a small list below.

Coonawarra is not the only place that Yalumba operate and we are looking forward to meeting more of the people and places of Yalumba. 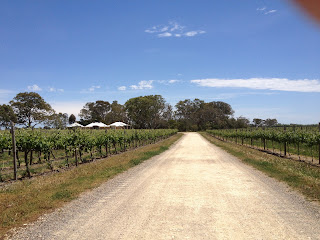 Look, I could go on and on about how great the Menzies Resort is, but it would just end up sounding like a travel brochure, so to sum it up; We fell in love with the Menzies and highly recommend it as a “must stay” when in Coonawarra. If I thought it would make a stronger point it would be highlighted or underlined. It seems like a side note and that is definitely not the case, but the wine was excellent. All the wine tasted was good and very good a couple were exceptional. Top wines, top place and top people. It can’t get much better! 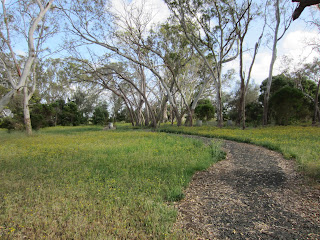 The following list of some milestones in Yalumba’s history is just the tip of the proverbial iceberg.

1849 Samuel Smith, former Dorset brewer obtains 30 acres of land just above Angaston from John Howard Angas. He names the property Yalumba, an aboriginal word meaning "all the land around" and, together with young Sidney, builds "Osborne Cottage" and plants his first vineyard.


1855 Samuel Smith exhibits his first wine - red and port at the Angaston Show.


1860 -1876 Yalumba becomes a significant purchaser of grapes from other local growers. The descendants from these early growers are still supplying grapes to Yalumba to this very day.


1883 Yalumba wines shown at Calcutta Exhibition boasting that they have been awarded prizes for 'full-bodied wines' at London, Paris, Bordeaux, Philadelphia, Sydney, Melbourne and Adelaide.


1966 Sir Robert Menzies, Australian Prime Minister, announces that the 1961 Yalumba Galway Vintage Special Reserve Claret was the best red wine he has ever tasted. From this, began "Signature Series" wine.


1986 First vintage of The Menzies Coonawarra Cabernet Sauvignon is released.


1988 Yalumba controlls its own vine propagation by producing rootstocks free from virus and phylloxera. These vines are being planted out in the Company Vineyards, as well as being passed on to growers.


1998 Yalumba is a finalist in the Ibis Award which acknowledges the outstanding efforts of Yalumba in integrating wildlife conservation with successful, commercial, sustainable farming.


1999 Final plantings of 328 acres of vineyard at Wrattonbully (see upcoming blog), in the Limestone Coast region, south-east of Adelaide is undertaken.


2001 The Menzies Wine Room and Vineyard opens in Coonawarra.


2005 Yalumba launches Vitis - a total quality environmental management program for their vineyards and for their growers.
ISO14001 Enviornmental Management System registration, covering processes involved in receival of grapes, winemaking processes, the filling, packaging, storage and distribution of red, white, fortified and sparkling wines, and spirits.
Yalumba becomes a finalist in for the Business Leadership Award for outstanding achievement in the promotion and facilitation of greenhouse gas action within the industry.


2006 Yalumba is honoured as Australia's first 'Leader' under the Australian Government's Greenhouse Challenge Plus Programme, with a recorded decrease of 9.5 per cent in greenhouse emmissions for every litre of wine produced at Angaston.
2007 Yalumba recognised by the US Environmental Protection Authority with a Climate Protection Award for their whole-of-business Environmental Mangement Programme. A first for the world wine industry.
Posted by Winewalkabout at 10:15 PM