Kind of a trick headline to get you to read about what we think are five truly amazing places. The operative term here is 'what we think'! Before you all start to campaign for your favorite area (although would be interested to hear about) these are just the places we feel are the top five. You are entitled to your opinion with or without facts.

Adelaide Hills; The Adelaide Hills region has really come along in recent years. Now while that may sound a little condescending its not meant to be. The Hills have in the last 5-10 years, found the magic and knowledge that allows for consistently good wine. The knowledge of the weather and the terrior and what it takes to get the best out of it. Now some years are always going to be better than others but there are some consistently fabulous wines coming from this region from a number of producers. With its summer months generally dry, with average temperatures considerably cooler than other Australian wine regions and in particular the night time temperatures being cooler than most surrounding wine regions, the wines generally take on elegant cool climate style with wines displaying great finesse and varietal intensity.

The Adelaide Hills is one of the largest geographical wine regions in Australia, and among the most beautiful to spend your time exploring. The area is also a place where new ideas are tested and some with great success, such as Gruner Veltliner, Blaufrankisch and Zweigelt from Hahndorf Hill are just one example


The Barossa Valley; The Barossa Valley is one the most recognized of the South Australian wine regions. Located about 70 Km north of Adelaide it has delivered outstanding vintages for over 150 years and covers an area comprising the Barossa Valley and Eden Valley. The Barossa is not just a great wine region as it still is an area full of growers of seasonal produce and makers of specialty foods. The area has one of the oldest regional food histories in Australia and is traced back to the German settlers of the 1840's. Tasting of this food is possible at not only most of the local area restaurants but also from some of the butchers, bakers and cheese makers in the area. There is also what is believed to be the oldest surviving Shiraz vineyard in the world.
'Langmeil is home to The Freedom Shiraz, planted in 1843 by vigneron Christian Auricht. Escaping war and persecution in Prussia, Auricht travelled to his new homeland, finding Freedom in the Barossa Valley. His original plantings survive to this day and are some of the oldest and rarest vines in the world. The Barossa is quit unlike any other wine region in Australia or the world for that matter, in that for over 150 years about 750 expert vignerons have blended their knowledge of the land and its climate with modern viticultural practice, creating a partnership with over 50 large and small wineries whose specialist skills have made the most of the high quality fruit.' (from Langmeil website) 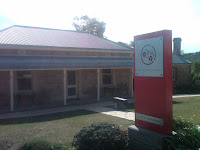 The Barossa is not a 'new world' wine region like Chile or the United States, nor is it tied down by old rules and regulations like they have in Europe. The first settlers in the area used their European experience, and for over 150 years, their descendants have adapted it with modern technology, and knowledge to suit the soil and climate of the area. It is this heritage and these partnerships that give The Barossa such a unique identity.

These are some we have visited;
Elderton Wines, Yalumba, Two Hands, God's Hill, 3 Days in the Barossa


Clare Valley; Clare Valley shares the distinction of being one of the oldest regions having been settled in 1840. Settlers from England and Ireland, as well as more diverse places such as Poland and Silesia moved into the region during the 1840's, producing a rich heritage of architecture and villages, which remain largely intact to this day. Vineyards were planted alongside those first villages and winemaking has continued ever since. The most important white variety is Riesling, with the Clare Valley regarded as its Australian home.
But that is not the entire story of wines in Clare Valley. The principal red varieties are Cabernet Sauvignon and Shiraz with a little Merlot. They make a range of styles of varietal wines, reflecting different approaches to winemaking as well as the influences of the various sub-regions and micro-climates in the valleys. Many other varieties are also grown, including Chardonnay, Semillion, Sauvignon Blanc, Pinot Noir, Tempranillo and Grenache.
The area has a lot to offer for those that visit here like the Riesling Trail. The Clare Valley's reputation for Riesling inspired the naming of the Riesling Trail, which is a recreational trail for walking and cycling. It runs 35 kilometres and connects the townships of Auburn, Leasingham, Watervale, Penwortham, Sevenhill, Clare and White Hut. Having spent some time walking along different sections of the trail at dusk it can be said that it is a wonderful walk. The Clare Valley has many places to eat, from bakeries and such to fine dining restaurants, as well as  more than 40 wineries, and most of them have a cellar door. Drop in for a taste.


Coonawarra; All wine regions like to think they are unique. The truth is mostly they are, but some are more unique than others. Some just have that certain "Je ne sais quoi". One of these regions that has this more than some of the others, is a place in the south east of South Australia, in an area called the Limestone Coast. The place with all this "Je ne sais quoi"is Coonawarra. Coonawarra is an Aboriginal word meaning "Honeysuckle". It is about 380 km southeast of Adelaide, close to the border with Victoria. Often called Australia’s “other red centre”, its premium red wines have won many awards. What makes this area so special is one of the most famous terroirs in the southern hemisphere if not the world. 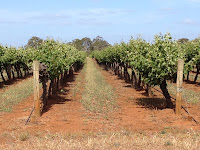 It is the combination of a thin layer of unique rich, red top soil (‘terra rossa’ or ‘red earth’) over an ancient limestone mantle encasing a pure, underground aquifer. Add to that a long, cool ripening season for the grapes and you have the makings of a hard won reputation as one of the world's finest wine regions, especially for red wines and, in particular, Cabernet Sauvignon and Shiraz. The cigar-shaped strip of 'terra rossa' is finite, approximately 12km long and 2km wide, and is all but taken up by vineyards. More than 24 Coonawarra wineries have cellar doors for your enjoyment. There are some area attractions that are also on the must see list if you are in the area and one of those is  the Naracoorte Caves National Park. This park is South Australia's only World Heritage site. The site was officially recognized in 1994 because of the importance of the fossils in the caves.

The Coonawarra area sits between two great attractions. In the north is the afore mentioned World Heritage Listed Naracoorte Caves, and to the south is Mt Gambier and the beautiful Blue Lake.


Coonawarra is an area that needs to be experienced and should be on every wine lovers list of places to go.


McLaren Vale; McLaren Vale is a great South Australian wine region, and sports more than 70 cellar doors. The region’s warm days and cool ocean evenings means it produces great Shiraz, Grenache, Cabernet Sauvignon and Chardonnay. They also grow and make wine from other varietals that include, Tempranillo, Viognier, Marsanne, Rousanne, Barbera and Sangiovese. It's less than forty five minutes from the city of Adelaide. The wine region is only minutes away from the stunning coastline and beaches that influence so much of the climate and lifestyle. The neighboring townships of Willunga, Aldinga, Port Noarlunga and Sellicks offer visitors some unique experience's rich in history, artisan craftsmanship and culture. Dry sunny weather helps viticulture by producing ripe grapes.
The heat is cooled by breezes off the surrounding ocean, and also the 'Gully Winds' from the Hills. This makes for a smooth ripening season during which time the grapes accumulate the flavor and intensity that make the areas award winning wines. The region is home to some of Australia’s most beautiful, unspoiled beaches and the sunsets are spectacular. There are any number of perfect vantage spots to sit and watch one while sipping a local wine.

These are some we have visited;
Olivers-Taranga, D'Arenberg, Victory Hotel, Chapel Hill, Yangarra, Coriol.


Although not a region, and not really fitting in with the title 5, the National Wine Center in Adelaide is also a great place to visit for a number of reasons. It has a great educational display of wine and vineyard information as well as tastings and events that are very very good. National Wine Center. Check em out while your in town.

There are more areas of note in South Australia, but this is a great starting point for a visit to one of the best wine regions in the world. The home of, Football, Meat Pies, Kangaroos and Holden cars. Go ahead and plan your trip, get it booked, and make it as long as you can because there are ton of great things to see, wonderful people to meet, and some fantastic wine and food to be had. We say it's a 'must do'!

But don't just come for the wine there are a million great adventures waiting. Check out this video for a look at just a few.

Posted by Winewalkabout at 8:18 PM